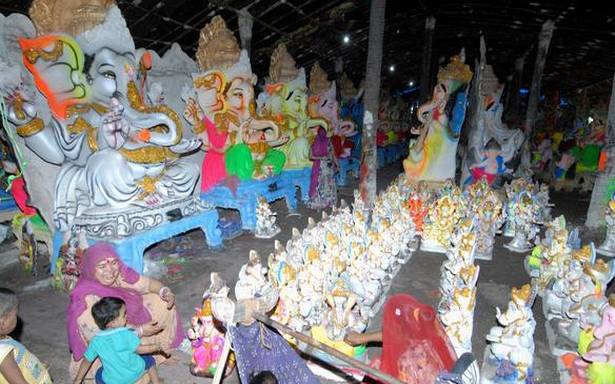 Artisans clueless as rows of idols lie unsold in godowns

Ganesh Chaturthi is just a few days away and yet, there is hardly any activity in Chagallu, where people come to buy huge Ganesh idols for a cheap price.

For the second year in a row, COVID-19 curbs have hit hard idol makers in Chagallu.

The artisans, who came from far off places in Gujarat, Rajasthan, West Bengal braving the virus, are now ruing their fates as the State and Central governments have issued directives to ban public celebration of the festival as the third wave threat looms large. They had been camping here for over eight-to-nine months after investing huge sums to make attractive idols of different sizes and shapes, a group of artisans said.

More than 50 families from northern States come here early in the year and return only after the festival.

The artisans lamented that even those who had paid them a part of the cost as advance were unwilling to take the idols following the curbs to discourage community celebrations.

They decided to make idols as usual as even cinema halls were opened.

“Had the governments made an announcement earlier, they would not have made the idols at all in the first place,” said Rathod Kapoor, an artisan, showing the rows of idols remaining unsold, each of them costing anywhere between ₹10,000 to ₹15,000 per piece.

“We are getting calls for cancellation of the orders,” said K. Samrajyam, who had let out her premises to the idol makers expecting handsome rent. Now she was unsure of getting payment from the artisans in view of the lacklustre trade this year.

Rise in cost of raw materials

There has also been a steady increase in the cost of raw material including paint, said a workshop owner K.Venkateswarlu who was clueless on paying wages to the workers who have been working day in and day out to make the idols.

Now all that they hope for is that at least those idols that measure less than two feet will be sold out.

Meanwhile, Prakasam Superintendent of Police Malika Garg made it clear that no social gathering would be allowed as also immersion processions. Those who want to immerse the idols in water bodies should do so without fanfare and by adhering to COVID norms, she said.