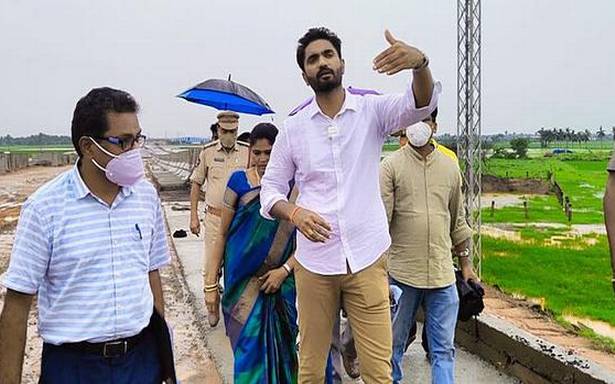 MP Margani Bharat has said that works pertaining to the ₹800-crore Greenfield Highway project proposed between Devarapalli in West Godavari district and Suryapet in Telangana have commenced under the aegis of the the Rajamahendravaram Project Implementation Unit of the National Highway Authority of India (NHAI).

The Ministry of Road Transport and Highways has granted the 162-km highway (new NH-365BG) as part of the economic corridor project under the Bharatmala Pariyojana, aiming at connecting Andhra Pradesh and Telangana with a robust road infrastructure that can support the vehicle speed limit of 100 km per hour. The total project cost is ₹2,600 crore.

“The first phase work of the Greenfield Highway work has commenced . It will reduce the distance between Hyderabad and Visakhapatnam via Khammam by nearly 100 kms. It will give a fillip to the tourism sector and improve economic development along the road,” said Mr. Bharat, who is also the chairman of the MPs’ Road Safety Committee (MPRSC) of West Godavari district.

A decision has been taken to appeal the State government to grant ₹55 crore required for land acquisition in West Godavari district for the highway project, said Mr. Bharat, adding that 31 villages that would be affected by the road project would be offered fair compensation.

The MP said that the 69-km Kovvuru-Gundugolanu road project (NH-216 (A) was nearing completion in West Godavari and expected to be completed by October. The road would reduce the distance between Vijayawada and Visakhapatnam by 40 km, he said after reviewing the project status.

“The new road infrastructure being developed by the Centre will give economy a boost, apart from contributing to the all-round development of the district. The reduced travel distance will ensure faster cargo movement, said Mr. Bharat.