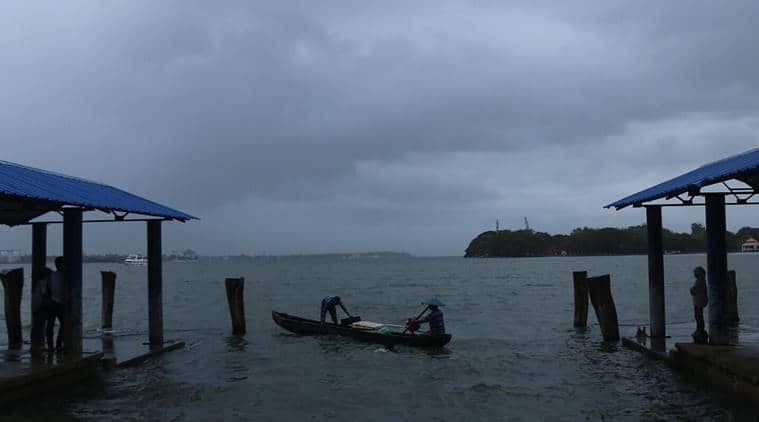 A deep depression over the Arabian sea that brewed over the past two days has intensified into a cyclonic storm, Vayu, and is likely to make landfall on the Gujarat coast Thursday morning, India Meteorological Department (IMD) said.

Vayu is further likely to transform into a severe cyclonic storm in the next 12 hours, IMD’s Cyclone Warning Division said in a bulletin.

As per an IMD alert, “It is very likely to move nearly northwards and cross Gujarat coast between Porbandar and Mahuva around Veraval & Diu region as a Severe Cyclonic Storm with wind speed 110-120 kmph gusting to 135 kmph during the early morning of 13th June.”

The Gujarat administration is put on high alert to deal with cyclone ‘Vayu’, officials said. CM Rupani said people living in the coastal belt would be shifted to safer places. He said that the entire coastline, starting from Kutch to south Gujarat, has been put on “high alert”. The state government has advised fishermen against venturing into the sea in the next few days, while ports have been directed to flag a danger signal.

Home Minister Amit Shah Tuesday reviewed the preparations for cyclone Vayu and directed officials to ensure all possible steps for people’s safe evacuation, officials said. In a high-level review meeting, Shah told them to ensure the maintenance of all essential services such as power, telecommunications, health, drinking water, and their immediate restoration in the event of damages caused to them, a Home Ministry official said.

CM Rupani said that leaves of all the employees concerned have been cancelled and they have been asked to join the duty. “After the Cabinet meet tomorrow (Wednesday), all the ministers will go to various districts to oversee relief and rescue operations,” he said. “June 13 and 14 are crucial for us. We have roped in the Army, NDRF, Coast Guard and other agencies for rescue and relief work. To minimise human casualty, we will start shifting people living in coastal areas to safer locations from tomorrow,” he said.

Principal secretary at Gujarat ports and transport department Sunaina Tomar said a disaster management plan has been put in place at all the ports. “We have installed power generators at all the ports. Cargo and Ro Ro ferry operations have been halted,” she said.

The National Disaster Response Force (NDRF) has pre-positioned 26 teams, comprising about 45 personnel each, and the rescuers are equipped with boats, tree-cutters, telecom equipment. The NDRF is also moving another 10 teams as requested by the Gujarat government.

IAF C-17 aircraft got airborne from New Delhi to Vijayawada Tuesday to airlift about 160 NDRF personnel from Vijayawada to Jamnagar to carry out the disaster relief operations in the cyclone-hit areas of Gujarat.

Areas to be affected and expected damage

Damage is expected in Porbandar, Junagarh, Gir Somnath and Amreli districts of Gujarat including “major damage to thatched houses and huts, rooftops may blow off, unattached metal sheets may fly, minor damage to power and communication lines while major damage to kutcha and some damage to pucca roads, flooding of escape routes, major damage to coastal crops, damage to embankments and salt pans, breaking of tree branches, uprooting of large avenue trees, moderate damage to banana and papaya trees whereas large dead limbs blown from trees,” is expected.