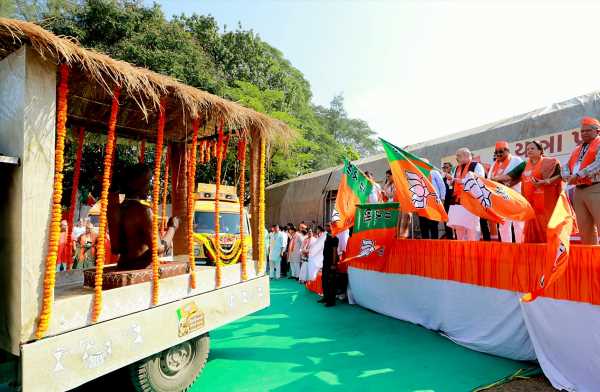 At around eight per cent of Gujarat’s population, Dalits are not a numerically dominant community in the state, but their votes are likely to get divided among the ruling Bharatiya Janata Party, opposition Congress and the new entrant Aam Aadmi Party in the upcoming Assembly elections, say political observers.

All political parties are trying their best to woo the community, because apart from 13 seats (out of the total 182 in the state) reserved for the Scheduled Castes, Dalit voters can also tilt the scales in a few dozen other seats, they feel.

While the BJP says it is confident Dalits will vote for it in the state assembly polls due this year-end, the Congress says it is paying attention to seats with 10 per cent or more Dalit population.

But in 2017, the BJP faltered and managed to win only seven seats, while the Congress won five. One seat was won by an independent backed by the Congress.

One of the Congress MLAs, Pravin Maru from Gadhada, resigned in 2020 and joined the BJP in 2022. BJP’s Atmaram Parmar won the byelection in the constituency.

Sociologist Gaurang Jani claimed Dalits in Gujarat are a confused community as far as political affiliation is concerned.

They are numerically not as sizable as many other communities and divided further in three sub-castes – Vankar, Rohit and Valimki.

“They are divided among themselves, with the BJP attracting Vankar, the highest in the stratification. They are more vocal and urban. But Valmiki, which are mainly sanitation workers, are divided,” claimed Jani, a retired professor of the Gujarat University.

The three political parties and the three caste segments will lead to a division of the Dalit votes, he said.

“This will lead to their political significance diminishing, especially as the community lacks a strong leader,” he added.

With the new entrant AAP laying claim to the legacy of Dr B R Ambedkar, the community’s votes are likely to get divided three ways, said Jani.

“The new generation of the community is confused…The voting pattern of the youth is going to be divided among all the three parties. The division will not benefit any one political party, nor will it benefit the community,” he said.

The BJP has been in power for 27 years. In all the elections that took place in these 27 years, Dalits have equally supported both the BJP and the Congress. The BJP has also taken many initiatives to attract Dalits. Being in power, Dalit leaders were given positions in different bodies, he said.

“Dalits have enjoyed a long association with the BJP,” Jani said.

On the other hand, the Congress could not keep its grip on the Dalit community as it has been out of power for a long period, he said.

“Even in the opposition, it failed to raise their issues as well as it was expected to do. Many Dalit leaders of the Congress shifted to the BJP. The party’s KHAM (Kshatriya, Harijan, Adivasi, Muslim) strategy could not work as polarisation on Hindutva marginalised Dalits further,” Jani said.

Dalits account for just eight per cent of the state’s population. They are normally an absolute minority in villages. Even in urban areas, their number is not large in a given pocket, he said.

“Also, the AAP’s strategy to attract Dalits by claiming the legacy of Babasaheb Ambedkar by side-lining Mahatma Gandhi makes it attractive to the community,” he said.

The Arvind Kejriwal-led AAP has already promised a number of ‘guarantees’ to people of the state if it is voted to power.

“I think the voting pattern of Dalit youth will be divided among the three parties. It will not go to a single political party. I don’t know which political party will benefit, but Dalits will not benefit from this,” he claimed.

Meanwhile, BJP spokesperson Yagnesh Dave said apart from publicising schemes of the state and central governments that are meant for the community, they are also roping in religious heads of holy places associated with the Dalit community like Jhanjharka and Rosra,

“Even in 2017, the Dalit community supported the BJP, and we believe it will extend us the same support in 2022,” he said.

The Congress aims to increase the Dalit voter turnout, especially in the unreserved seats where the community accounts for 10 per cent or more of the population.

The AAP is hoping its ‘guarantees’ like 300 units of free electricity per month, unemployment dole and Rs 1,000 allowance for women will attract the Dalits also, besides other communities.

“This is probably the first time that Congress is not limiting itself to reserved constituencies. We have identified around 40 constituencies with more than 10 per cent Dalit voters,” Pithadiya said.

The Congress had won 19 out of these 40 constituencies in 2017 and lost some seats by a narrow margin, he added.

“We want Dalits to come out strongly and vote for the Congress in these constituencies. If this happens, we can win. We will try and ensure that we field Dalit candidates in unreserved seats too,” he said.

The Congress had fielded Dalit candidates in the unreserved seat of Sayajigunj in Vadodara city in 2017 and in Limbayat in Surat city in 2012. It lost in both the places.

The 2017 election was preceded by protests against the ruling BJP over the flogging of members of a Dalit community by cow vigilantes at Una in Gir Somnath district.

While attacks on Dalits by the members of dominant upper castes and Other Backward Classes and discrimination are not uncommon in rural Gujarat, the Una incident provided a major issue for the Congress to rally the community on its side.

Dalit activist Jignesh Mevani, who led the protests after the Una incident, won the 2017 election from the Vadgam seat, reserved for the Scheduled Caste candidates, with the Congress’s support.
Mevani recently announced that he will contest the 2022 election on Congress ticket.