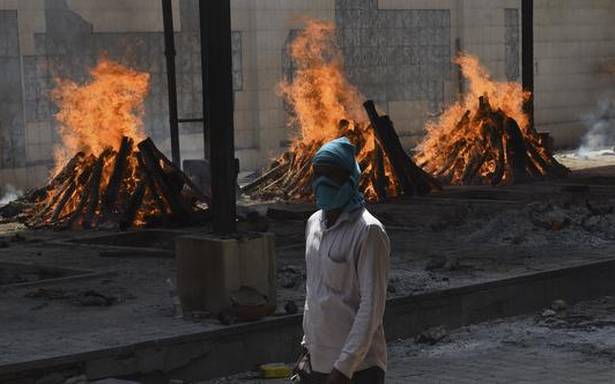 Almost a week into the lockdown in Gurugram, the number of bodies reaching the city’s cremation grounds has gone down daily.

“There is a sense of relief over the past three days. More than two dozen bodies reached Atul Kataria cremation ground till afternoon everyday during the peak, but today [Wednesday] only 10-12 bodies have arrived so far. Similarly, the Sector 22 cremation ground is almost full by noon, but only five families came for cremation so far. The Caterpuri ground has 10 platforms reserved for COVID-19 bodies and we have so far got only four bodies on Wednesday against 9-10 on a routine. In Chauma too only two bodies have come so far,” said Pandit Devdutt Sharma, who performs last rites at these four cremation sites.

Mr. Sharma recalled that the situation was so grim till a few days back that there was not enough space for cremation. “For the first time in my life, I got calls from the Ministers recommending last rites. There was virtually no space and cremation went on till late at night. But the situation has thankfully improved over the past three days,” he claimed.

He, however, added that the families reaching the cremation ground were fleeced by ambulance owners. “A family reaching Atul Kataria cremation ground today with the body of a woman paid ₹8,000 to the ambulance for a distance of just five km. I have heard people are paying ₹35,000-₹40,000 for ambulances for covering 5-10 km.”

Ritu Raj, who, along with dozen friends, has been helping families to perform the last rites of their loved ones, claimed that they got 10-15 calls daily seeking help for ambulances or cremation. “There have been instances where the family was even not willing to offer shoulder to the bier of their loved ones, fearing infection. We helped them. I had to lit the pyre too in a few cases. Sometimes, the families can’t find an ambulance, and on a few occasions, the poor families don’t have enough financial resources to carry out the last rites. We take all necessary precautions while conducting last rites,” said Mr. Raj.

Chief Medical Officer, Municipal Corporation of Gurugram, Ashish Singla, said that the number of cremations had gone down by 30-40% over the past three days.