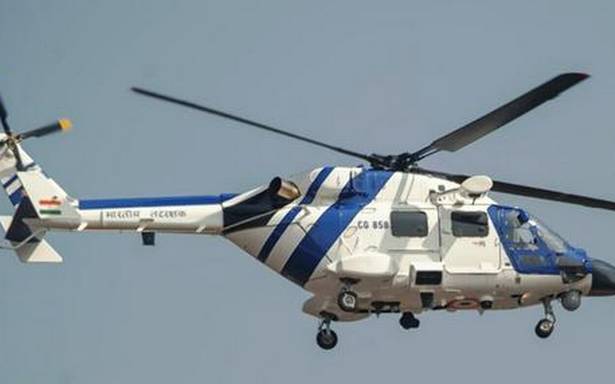 ‘All three services are part the project, Navy has given its requirements’

Hindustan Aeronautics Ltd. (HAL), which is planning to indigenously design and develop a medium lift helicopter, the Indian multirole helicopter (IMRH), is hopeful of finalising the detailed project report in the next few months and approach the Cabinet Committee on Security (CCS) by year-end for project sanction.

“All the three services are on board the project. The Navy has already given their requirements, and we are discussing them right now. It will be a second platform with two different versions. The Army and the Air Force have promised to give the Preliminary Services Qualitative Requirements (PSQR) within two months. After that, it will take another two months to make a detailed project report (DPR),” HAL Chairman and Managing Director R. Madhavan said.

Once the DPR is ready, the HAL will approach the CCS for project sanction after which funds will be released. The project is estimated at around ₹10,000 crore, including for the two different versions for the Navy, and will take seven years for design and development.

At a meeting two weeks ago with the Secretary, Defence Production, these issues were discussed with the three services and the Navy put across its requirements. The Army and the Air Force were earlier expected to share the PSQRs by June which got delayed due to the second wave of the pandemic and have now sought two more months.

A HAL official said that hoping to secure the CCS sanction for the project in 2022, HAL in the meantime has put in its money for preliminary works. But major funding has to now come in because prototypes have to be made, detailed designs are to be done, which takes lot of money, and needs CCS sanction, the official stated.

The IMRH is envisaged as a medium lift helicopter with a maximum all-up weight of 13 tonnes to replace the Russian Mi-17 class of helicopters in service. Preliminary design of the IMRH has already been carried out and it will be powered by twin engines, suit the high altitude requirements of the Army and Air Force as well feature blade folding option for ship deck operations, HAL officials said.

Speaking at Aero India in February, a Chief Designer of the HAL said that the IMRH was intended to address India’s requirement to replace the Mi-17 helicopters due for replacement progressively from 2028.

Once the design phase is complete, the development process will see the manufacture of at least three prototypes, one structural test specimen and one ground test vehicle which will be put through ground and flight testing, followed by certification before it is cleared for series production.

The HAL also intends to target the global helicopter market by benchmarking the proposed IMRH against helicopters such as Russian Mi-17, Sikorsky S-92, AgustaWestland AW-101, NHIndustries NH-90 and Eurocopter EC-725.

The intended roles of the IMRH are to support air assault, air transport, combat logistics, combat search and rescue and casualty evacuation as well as VVIP duties.