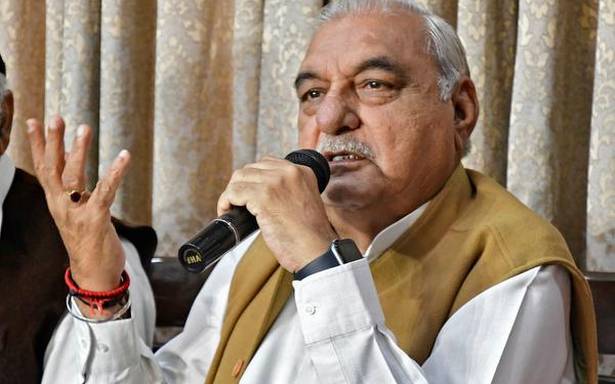 Former Chief Minister and Leader of the Opposition Bhupinder Singh Hooda on Monday hit out at Haryana’s BJP-JJP government, accusing it of creating a deliberate shortage of fertilisers in the State in a bid to harass the farming community.

Mr. Hooda alleged that farmers across the State were struggling to get urea these days.

“Farmers have to wait for hours in long queues for urea. Earlier, at the time of sowing of crops, the government had tormented the farmers with short supply of di-ammonium phosphate (DAP). And now farmers have been made to stand in queues for urea. It is a matter of great misfortune that during the BJP-JJP government, fertilisers are being distributed routinely with police security and children and women also have to stand in queues outside the police station to collect supplies,” the Congress leader said.

“Despite knowing the need, timing and demand of farmers, the government is deliberately creating shortage of fertilizers. This encourages black marketing; farmers have to buy fertilisers at expensive rates, which further increases the input costs of the crop for them,” alleged Mr. Hooda.

“Crops of mustard, cabbage, potato and other vegetables have suffered heavily due to continuous rains for the last four to five days. The government should immediately get the girdawari (revenue survey) done and give compensation to the farmers,” he demanded.

Criticising the government for non-payment of timely compensation to farmers, the former Chief Minister said, “Last year in October-November as well, due to rains, standing crops on more than 5.50 lakh acres of land were ruined. More than one lakh farmers had appealed to the government for compensation for the loss but they have not got compensation till now. The government should make up for the delay and compensate the damage suffered by the farmers last time.”

Mr. Hooda said every section of the society in Haryana is facing troubles because of the ill-conceived policies of the State government, be it traders, labourers or farmers.