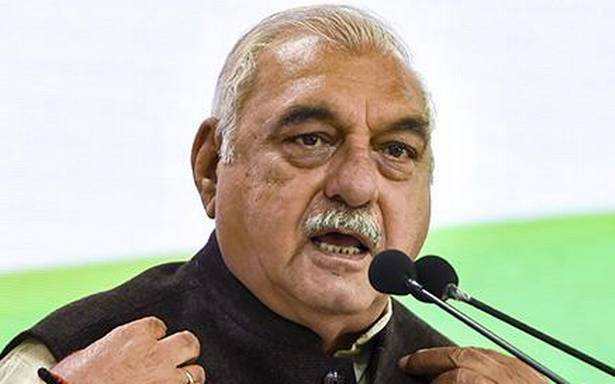 ‘Coalition regime will fall due to burden of its own failures’

Former Haryana Chief Minister and Leader of the Opposition, Bhupinder Singh Hooda, on Wednesday said the Bharatiya Janata Party-Jannayak Janta Party coalition government in the State had lost the trust of both, the public and the legislators, and would fall due to the burden of its own failures.

Mr. Hooda was in Gurugram to pay tributes to former minister Sukhbir Kataria’s mother on her death anniversary.

Responding to questions on Indian National Lok Dal’s lone MLA Abhay Chautala’s offer to resign, Mr. Hooda said he should vote against the coalition government on no-confidence motion instead of resigning. “If he resigns from the post of MLA, then it will benefit the government, because the Opposition will have one less vote,” he said.

Reiterating his support to the farmers’ agitation, Mr. Hooda said the farm laws harm not only the farmers but also every consumer and poor section of the society and this is why the movement has received support from all sections of the society. He said the government should accept the demands of the farmers and bring an end to the agitation.

The former Chief Minister said the laws would hurt the consumers and poor as there are fears that profiteers would indulge in black marketing.