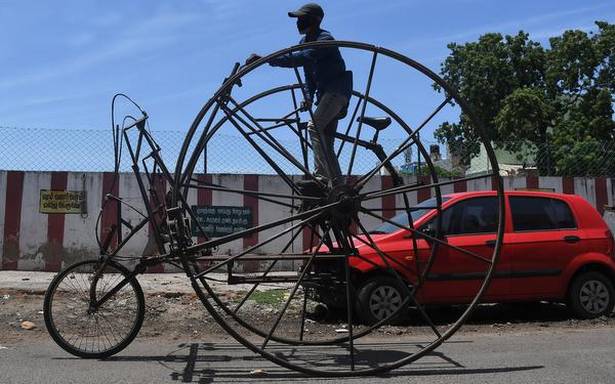 In a bid to market his creation, G Rajendran cycles from his home in Villivakkam to Pattinapakkam and Marina Beach, Chennai. He is now making customised cycles in steel. Have you spotted him on the roads yet?

In the sea of snarling traffic on the bustling Nungambakkam High Road, G Rajendran stands tall… or rather rides tall. Seated atop a peculiar, large contraption, he glides past. His vehicle of choice is a cycle with three wheels, no chain, weighs 220 kilograms, and measures seven-and-a half-feet in height, slightly taller than most SUVs on the road.

The 56-year-old from Villivakkam is a creator and a cycle enthusiast. He has been designing and putting together cycles of various shapes, sizes and styles for the last 25 years. “I just had so many ideas that I decided to give them shape,” says Rajendran who works in a lathe shop. “With the money I earn as salary, I buy metal waste and make these prototypes with them,” he says.

His salary depends on the amount of work the small lathe factory gets. “Sometimes it could be ₹1,500 a month, at other times marginally more or even less. It took years of savings, and some donations from helpful people, to create this three-wheeled cycle which cost me ₹63,000,” he adds.

G.Rajendran a resident of Villivakkam built a 7.5 feet long giant bicycle, He has been making such cycles for the past many years. | Photo Credit: JOTHI RAMALINGAM B

A couple of years ago, actor Vijay Sethupathy happened to see Rajendran on his three-wheel cycle near Ega Theatre and apparently invited him to the sets in YMCA Royapettah, where he was shooting for a film. “He asked me if I would like to act in the role of a father. I said the only thing I can do is create,” claims Rajendran, who has created three versions of this large cycle purely out of interest. The other two have two wheels and measure four-and-a-half feet.

G.Rajendran a resident of Villivakkam built a 7.5 feet long giant bicycle, He has been making such cycles for the past many years. | Photo Credit: JOTHI RAMALINGAM B

Made of iron, these cycles are heavy and that is the reason they do not have any takers, says Rajendran. He has received requests to make them lighter. His next cycle will be made of stainless steel. “I received an order for a three-feet cycle, from a client in Anna Nagar,” he says. While the smaller ones can be made in a couple of weeks’ time, the larger ones took him nine months to a year and a half.

With people experimenting with quirky home and restaurant decors now, has he received orders to create his unique cycles as installations? “Not yet. But a few people do rent it out for photo shoots, especially for weddings at ₹2,000 per day,” says Rajendran.

Not many people know of his creations, he says. In an attempt to make his work known, Rajendran cycles from Villivakkam to Pattinapakkam and Marina Beach and then back. “It’s great exercise,” he says, explaining how the pedal is connected to the wheel. And is it legal on traffic-filled roads? “While as of now there are no such laws, I have often found cops looking at me. A few even stopped and wanted to see if the brakes work and seemed intrigued with the giant cycle,” he says.