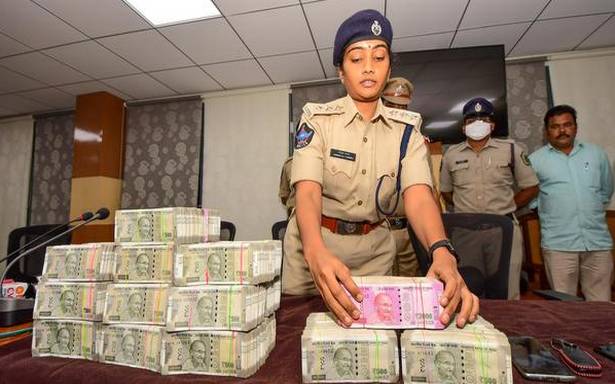 The city police busted a suspected hawala racket and arrested two persons near the Telugu Talli flyover on Saturday night. The police seized unaccounted cash of about ₹70 lakh, in the denomination of ₹500 and ₹2,000 notes from them.

The arrested were identified as Roshan Kumar Jain (49) and O. Srinivas, both from the city. A few more suspected to be involved in the case are yet to be arrested.

Addressing the media here on Sunday, Assistant Commissioner of Police (East) Harshitha Chandra said that Roshan Kumar has been running an electrical shop near Rama Talkies with his business partner Charitra Kumar. On the instructions of Charitra Kumar, Roshan and his friend Srinivas had gone to Gajuwaka to meet one Vikram, a businessman.

Roshan Kumar allegedly showed a WhatsApp image of ₹10 note with its identification number, which he received from Charitra Kumar to Vikram. Vikram had allegedly given ₹70 lakh cash in two bags to Roshan and asked them to hand over it to Praveen Kumar Jain through a code.

Acting on a tip-off, the III Town Police Inspector K. Eswara Rao and team intercepted the vehicle and seized the unaccounted cash from the duo.

The ACP said that for doing this Roshan would receive ₹300 commission for every ₹1 lakh.

“We have informed officials of the Revenue and the Income Tax Departments about the seizure,” said Ms. Harshitha.

Further investigation is on.