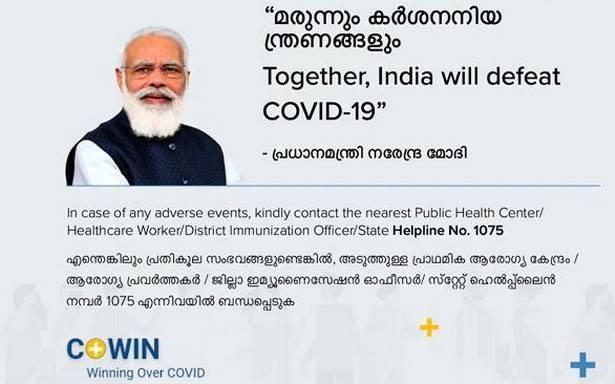 It is a publicity-oriented litigation, fit case that to be dismissed with a heavy cost, say the court

The Kerala High Court on Tuesday, December 21,2021, dismissed a writ petition seeking a directive to remove the photograph of Prime Minister Narendra Modi from paid COVID-19 vaccine certificates and imposed a heavy litigation cost of ₹1 lakhs on the petitioner.

Dismissing the petition, Justice P.V.Kunhikrishnan observed "this was a frivolous petition filed with ulterior motives and I have a strong doubt that there is political agenda also to the petitioner".

The court added that it was publicity-oriented litigation. Therefore, this was a fit case that was to be dismissed with a heavy cost.

The court further observed "the petitioner should study the respect to be given to the Prime Minister and others by watching at least the parliamentary proceedings, which are available live on National TV. The opposition leaders will object to the policies of the Government with vehemence. But they will address the Prime Minister as the ‘Hon’ble Prime Minister"

The petition was filed by. Peter Mayaliparambil from Kottayam who claimed to be a State-level master coach of the Jawaharlal Nehru Leadership Institute of New Delhi.

The court while imposing a heavy cost on the petitioner observed that thousands of cases — criminal, matrimonial and property disputes — were waiting for hearings. In such a situation, when frivolous petitions were filed, they should be dismissed with a heavy cost.

The court asked the petitioner to pay ₹1 lakh within six weeks to the Kerala State Legal Services Authority (KELSA) which is helping the poor genuine litigants.

The petitioner contended that carrying the photograph of the Prime Minister in vaccination certificates with a morale-boosting message in a pandemic situation was an intrusion into his privacy and that it was a ‘compelled viewing’.The Centre government had no right to take the credit for the vaccination by inserting a photograph of the Prime Minister in the certificate issued to a paid vaccine recipient. It was a certificate issued merely to confirm the status of vaccination of a person, he argued.