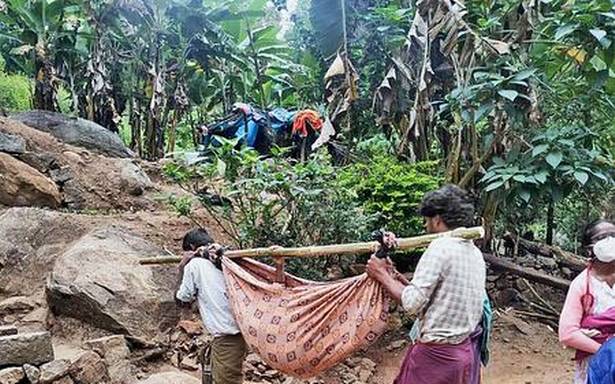 Staff from the Health Department in the Nilgiris walked 4 km to treat a 19-year-woman and her prematurely-born child near Kotagiri recently.

After the efforts of the team of government health workers were shared online, a non-governmental organisation, working on preventing infant mortality deaths, donated an ambulance to the Health Department for use to reach remote tribal hamlets in the district.

Speaking to The Hindu, P. Maharajan, an assistant surgeon attached to the Primary Health Centre (PHC) in Nedugula, said that his colleague, Chandrika, from the PHC in Sholur Mattam, as well as nurses and other staff, from the Health Department rushed to the village after hearing that the woman had given birth to a premature baby and required immediate medical attention on July 3.

The woman lived in a remote tribal hamlet near Thalamukku, a few kilometres from Sholur Mattam in Kil Kotagiri.

“Since the village is inaccessible by vehicles, the Health Department team had to walk to the village. The patient had to be carried to the nearest point that can be accessed by an ambulance on a makeshift stretcher, fashioned from a wooden pole and cloth. The patient was then quickly taken to the Government Medical College and Hospital in Udhagamandalam, where the condition of both the mother and the child were stabilised,” said Dr. Maharajan.

After posts about the work of the health workers were shared on social media, an NGO, ‘Pretty Lil Hearts’reached out to the Health Department and donated an ambulance that would help serve the tribal population of 25,000 people in the Nilgiris.

The ambulance was handed over to the Deputy Director of Health Services, Nilgiris district.

Both the mother and child are said to be doing well.