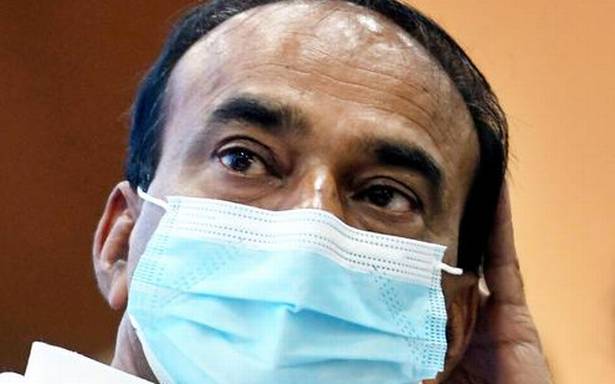 Eatala says though the Central government warned about second wave, severity of it was not informed

For the third time in a row, Telangana Health Minister Eatala Rajender has criticised the manner in which the Central government is allotting COVID-19 medical resources like Remdesivir, oxygen, and vaccines. Urging the Central government to utilise the huge machinery to efficiently allot the resources, he had demanded 600 metric tonnes of oxygen allotment to the State. Current allotment is 300 metric tonnes.

At a press conference held in Hyderabad on Thursday, Mr Rajender said that though the Central government warned about second wave, severity of it was not informed. Would they have held elections or given permission for Kumbh Mela if the central government expected the severity or had prior information about it, he questioned.

When asked if he was trying to shift the blame when cases are exploding in Telangana, the Health Minister said that he was responding to political criticism, but not trying to shift blame. However, people in the State said that it is the people who would be at loss when States and Central government point fingers at each other.

At the press conference, he has suggested people in home isolation or institutional isolation to undergo blood tests every 3-4 days to know if the patients are slipping into critical stage. D-Dimer, IL-6, CBP, and other tests would be performed. Mr Rajender said that the blood tests would be conducted at 19 Telangana Diagnostic Centres, which would start the tests in 2-3 days.

However, numbers to call or who should be contacted to give the blood samples was not announced by the Health Minister at the press conference.

Around 1.75 crore people in the State are in 18-44 years age group So 3.5 crore COVID-19 vaccine doses would be required to give two doses to all of them. Mr Rajender said they are planning procurement.