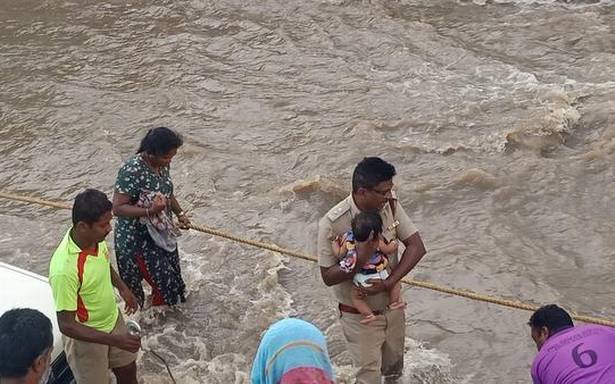 In Namakkal, areas in Tiruchengode and Pallipalayam regions were severely affected by the rain during the early hours of Friday as several low-lying areas were flooded. The Cauvery bridge was flooded affecting traffic movement. Rainwater inundated important areas of the town. Fire and Rescue personnel rescued persons stuck in vehicles and shifted them to safer places.

Talking to presspersons, Ms. Singh said that rainwater had also stagnated in a few parts of Allampalayam town panchayat. A few houses in Tiruchengode had been affected. Two schools in the region had been granted holiday for the day, she said.

Ms. Singh said that the Agriculture Department had been advised to check agricultural lands affected by rain. She added that revenue officials had been advised to take action against encroachments in water channels. Ms. Singh said that 60% of works had been completed as part of mass cleaning works. Hence, areas in Kumarapalayam had not been affected by the rain. She added that the mass cleaning works would continue until 100% of the works were completed.

Fire and Rescue services had mobilised teams in nearby areas to conduct rescue operations, if required.

An average of rainfall of 38.2 mm was recorded in Namakkal on Friday. 20 mm rainfall was recorded in Erumapatti, 71.4 mm in Kumarapalayam, 7 mm in Mangalapuram, 36 mm in Mohanur, 9 mm in Namakkal, 24 mm in Paramathi Vellur, 45 mm in Puduchatram, 72 mm in Rasipuram, 4 mm in Senthamangalam, 92 mm in Tiruchengode, 7 mm in District Collectorate premises and 71 mm in Kolli Hills.