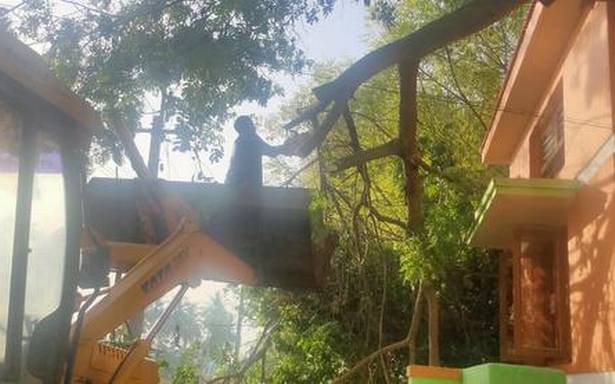 Heavy rain that lashed Watrap and Srivilliputtur led to power cuts in many areas after several trees uprooted and fell on overhead electricity cables on Tuesday night.

Crackers stocked in a fireworks unit went up in flames after lightning struck a magazine near Sivakasi.

The rain that started at around 6 p.m. was accompanied by thunder and lightning. Strong wind led to around 40 trees getting uprooted and broken branches fell on electric cables.

Srivilliputtur town plunged into darkness due to power cut.

“The rain that started around 6 p.m. continued till 8.30 p.m. Heavy rain accompanied by frequent thunder and lightning prevented us from taking up restoration works,” TANGEDCO Divisional Engineer, L. Chinnadurai said.

“Insulators on poles were damaged by lightning in at least 15 locations that had to be changed,” he added.

The workers continued the work throughout the night and power restoration started late at night.

“Power was restored in almost all areas in the town by midnight. Power supply in some areas in Watrap also was restored,” he added.

However, some poles that were located in tanks meant for power supply to farms were under restoration, he added.

Meanwhile, fire triggered by lightning destroyed finished goods stocked in a magazine at a fireworks unit near Maraneri. The fire was reported at around 7.30 p.m. following heavy rain.

Fire and Rescue Services personnel from Sivakasi, led by its Station Fire Officer, K.P. Balamurugan, fought the flames for more than two hours.

However, no one was injured in the accident.

Meanwhile, following overnight heavy rain in Watrap region, the district administration did not allow devotees to climb up Sathuragiri hills to offer prayers at Sundaramahalingam temple.

The temple authorities had allowed devotees to go to the hill-top temple for four days from Wednesday in connection with Amavasai festival on Friday.

However, as the wild streams were in spate, as a precautionary measure officials of Forest Department stopped the devotees at the foothills in Thaniparai.

“Based on tonight’s (Wednesday) rain, we will take a call on permitting devotees for the trekking in the hills on Thursday,” a temple official said.