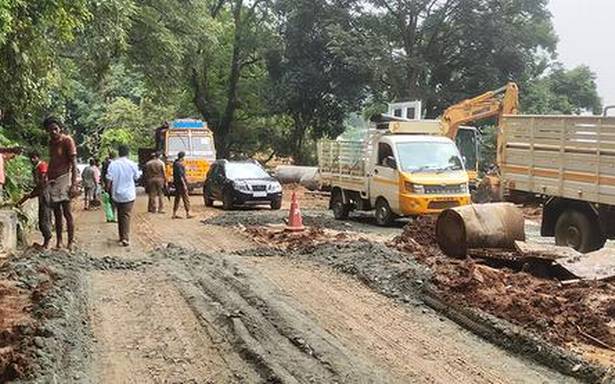 Chennai records highest rainfall for July in a decade

With the southwest monsoon becoming vigorous, isolated heavy rain has been forecast in the Western Ghats on Friday.

While parts of north Tamil Nadu may experience light to moderate rainfall, the India Meteorological Department has warned of landslips in the Nilgiris and Coimbatore districts, which are likely to receive heavy to very heavy rainfall at one or two places.

A low-pressure area over northwest Bay of Bengal and the neighbourhood will trigger isolated heavy rain over the Western Ghats. As the circulation is tilting southwest, it would have an impact over Rayalaseema and north Tamil Nadu districts such as Erode, Tirupattur, Ranipet, Vellore, Chennai, Kancheepuram and Krishnagiri districts.

N. Puviarasan, Director, Area Cyclone Warning Centre, Chennai, said north coastal areas may experience light to moderate rain due to wind convergence. Moisture-laden southeasterlies coming into coastal areas would bring rain. “We expect a dip in rain on Saturday and thunderstorms will return particularly over northern parts of the State and Puducherry from Sunday following convective activity,” he said.

Chennai may continue to enjoy generally cloudy skies and thunderstorms with light to moderate rain in some areas during the evening hours till Saturday. On Thursday, the city experienced pleasant weather with the day temperature remaining at 33 degree Celsius, which is 2.1 degree Celsius below normal for the period.

Most districts have recorded good rainfall that is in excess or largely excess so far this season. The State has recorded an average rainfall of 17 cm, which is 68% more than its normal rainfall since June 1. This month’s rainfall has contributed immensely to the overall monsoon rainfall as Tamil Nadu has received 10.7 cm of rainfall so far from July 1.