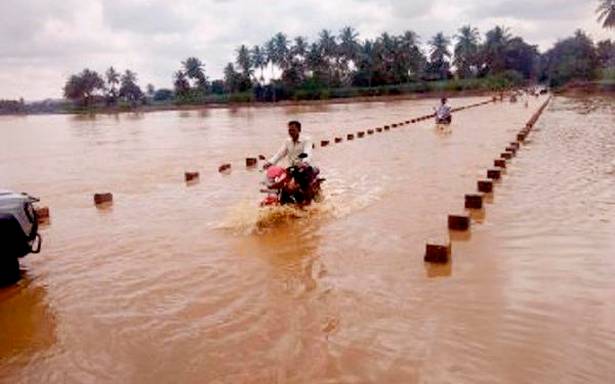 Officers have asked farmers and inland fishermen not to venture into rivers in Belagavi and Bagalkot districts; as many as 16 bridge-cum-barrages are submerged

Heavy rain across the region raised a flood scare on the river banks in North Karnataka on Thursday.

In Belagavi and Bagalkot, officers asked farmers and inland fishermen not to venture into rivers.

The police had to struggle for hours to clear the traffic jam on the Belagavi-Kolhapur National Highway after parts of it were submerged in water.

An abandoned house collapsed in Khade Bazaar after heavy rain. No one was injured. A passer-by who was nearby was saved as he heard the sound of falling stones and ran to safety.

The Belagavi District Police pulled out a car that was stuck in a ditch on the Kolhapur highway near Rani Channamma University on Thursday.

The driver lost control of the car as rainwater flooded the highway. The car slowly slid to the left side of the road. The driver ran to safety. Heavy rain had filled the ditch with water. Commuters who saw the car slid into the ditch called the police. Kakati Police went to the spot and used a jeep to pull the car out. No one was injured, Deputy Commissioner of Police Vikram Amathe said.

Heavy rain in Belagavi and parts of South Maharashtra led to an increased inflow into the Krishna and its tributaries.

However, there was no immediate threat of a flood as inflow into the Krishna was less than two lakh cusecs, officers said.

There was 33.77 tmcft water in the Raja Lakhamagouda Reservoir on the Ghataprabha that has a total capacity of 51 tmcft of water. Inflow was 17,467 cusecs and outflow 134 cusecs.

In the Renuka Sagar Dam on the Malaprabha, there was 21 tmcft of water out of the gross capacity of 37.73 tmcft. Inflow was 1,317 cusecs and outflow 194 cusecs.

Meanwhile, Deputy Chief Minister Govind Karjol announced that the State government has given administrative approval to construct a wall to stop the flooding of the Malaprabha at Hampiholi near Ramdurg in Belagavi district. This is to be built at an estimated cost of ₹126 crore.

The State Cabinet has granted administrative approval to the project for which demand was long pending.

This will raise the wall to stop flooding of the Malaprabha that tends to flood and damage crops and property in Ramdurg taluk.

The Deputy Chief Minister’s office released a press note saying that the project would be completed in time.

The project aimed at halting the river from flooding due to excessive rainfall will also help in reducing damage due to flooding in the surrounding areas.

The Cabinet okayed the transfer of three acres of land owned by Karnataka Neeravari Nigam to the Revenue Department for the construction of a Mini Vidhan Soudha at Badami in Bagalkot district. This will help people by bringing all government offices in one building, the Deputy Chief Minister said.