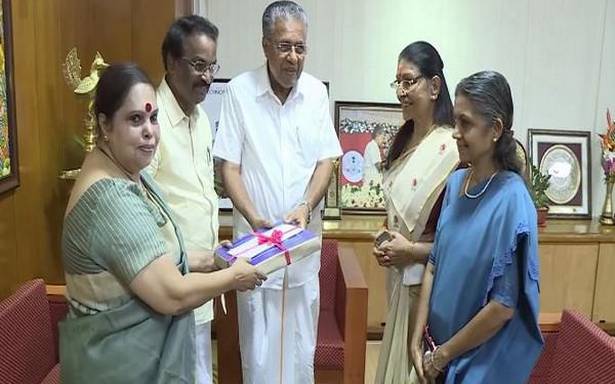 Report on harassment and gender inequality in the Malayalam film industry was submitted on Dec. 31, 2019

More than two years after the Hema commission report to address issues of sexual harassment and gender inequality in the Malayalam film industry was submitted, the State Government is yet to make public or take any action on the report.

The Commission, constituted in the aftermath of the actor assault case, had submitted the report to the Chief Minister on December 31, 2019. Members of the Women in Cinema Collective who are yet to see the contents of the report, question the lack of transparency regarding the report for which many women in the industry have given detailed testimonies of the harassment they experienced.

Filmmaker Anjali Menon, a member of the WCC, said that revealing the list of findings is important because any recommendation has to be seen in the context of these findings.

“Why don’t they officially list the findings? While our focus is on knowing what is happening here, their biggest concerns seem to be around who. When the issue was raised in the Assembly, single word recommendations like ‘E-toilets’ were mentioned, which does not reveal the plight of the women working here. An extreme case of sexual assault propelled all of us to come together and led to the formation of the WCC. Our entire attempt is to make sure that such a thing does not happen again in the industry. Five years since that incident, are we sure that it won’t repeat? The film industry comes together for everything, but outside the WCC, almost all have remained silent on these issues,” Ms.Menon told The Hindu.

Justice K.Hema, who headed the three-member committee said that the Government seemed to be working on implementing it.

“As far as I know, the Government is moving towards implementing the report recommendations. The COVID-19 pandemic might be one of the reasons for the delay. Some of the serious issues in the industry cannot be solved without enacting a statute and the setting up a tribunal for the industry. In addition to sexual abuse, there are lot of other issues which are very serious, including unofficial bans. The issues raised concern not just women or actresses alone, but several men and other categories of persons working in the industry. The report is also meant to protect those who will be joining the industry from practices like casting couch. The contents of the report as such need not be made public as there are sensitive materials which were confidentially conveyed to the committee by both women and men,” Justice Hema told The Hindu.

Film editor and WCC member Bina Paul said that she is perplexed as to why the report has not been discussed at any level, if the Government is acting on it.

“We are not being suspicious, but are wondering about this lack of transparency. If they are acting on it, why are they not consulting the stakeholders from the industry? There has been no communication regarding this,” said Ms.Paul.

According to Ms.Menon, the non-transparency around the report is not an independent phenomenon, but has to be seen in the context with other issues like non-implementation of the Prevention of Sexual Harassment (POSH) Act in the industry and the plight of the survivor, for whom WCC got together.

“The Women and Child Development Department has to ensure that the POSH Act is implemented and take penal action against those who refuse to follow the law by cancellation of licenses of fine imposition. None of these are being looked into. When we say that we want a professional space, it is not going to be only for women. Men too would have a safer and more professional space. We want women to be working without having the constant fear of being harassed or discriminated against or humiliated or assaulted,” she says.

The Producers’ Guild of India has taken steps to ensure that film shootings are being held in compliance with the POSH Act, after the Women’s Commission took a strong stand in Maharashtra. Though it is now being followed in film sets in Mumbai, those in Kerala seem to be looking away from it.