Newly-appointed British Prime Minster Rishi Sunak said on Tuesday that he has been elected to fix some of the “mistakes” made by his predecessor as he promised to place “economic stability and confidence” at the heart of his government’s agenda. 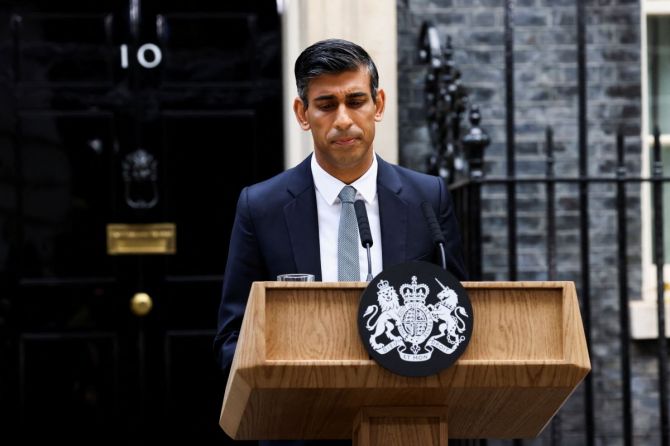 The 42-year-old devout Hindu formally took charge as Britain’s first Indian-origin prime minister after an audience with King Charles III on Tuesday, a day after he was elected the new leader of the Conservative Party in a historic leadership run. The investment banker-turned politician is the youngest British prime minister in 210 years.

Speaking outside 10, Downing Street in London — the prime minister’s official residence –Sunak said he would confront the “profound economic crisis” with compassion and lead a government of ”integrity, professionalism and accountability.”

Sunak said that he has been chosen as leader of the Conservative Party and prime minister to “fix the mistakes” made by his predecessor Liz Truss.

“That work begins immediately,” he added.

He said that during his time as chancellor he did everything he could “to protect people and businesses” through schemes such as furlough.

“I will bring the same compassion to the challenges we face today,” he said, adding that he will not leave the next generation with a “debt to settle that we were too weak to pay ourselves”.

“I will unite our country not with words but with action,” Sunak said. “I will work day in and day out to deliver for you.”

“Together we can achieve incredible things,” he said.

Rishi Sunak became Britain’s third prime minister of the year on Tuesday and now must turn his attention to taming an economic crisis that has left the country’s finances in a precarious state and millions of Britons struggling to afford food and energy bills.

Sunak’s victory in the Tory leadership race came at the end of a dramatic few days in Westminster since Liz Truss resigned last Thursday in the wake of a disastrous tax-cutting mini-budget and several policy U-turns.

Former prime minister Boris Johnson ruling himself out from the contest over the weekend and Leader of the Commons Penny Mordaunt conceding defeat just moments before the shortlisting deadline on Monday paved the way for a remarkable political comeback for Sunak – after having lost the Tory membership vote to Truss just last month.

However, his popularity as the frontrunner among his party colleagues was replicated yet again as more than half the Tory MPs came out publicly in his support. He now faces the enormous challenge of steering the UK economy through massive inflationary turbulence and also uniting the different wings of a divided Conservative Party.