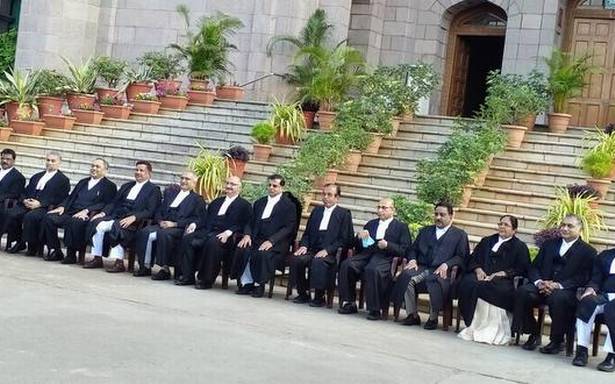 A Full Court meeting was held here on Monday to bid adieu to Telangana High Court Chief Justice Raghvendra Singh Chauhan who has been transferred to Uttarakhand HC.

Describing the outgoing CJ as a man of good heart, Advocate General B.S. Prasad said the CJ had given immense confidence to junior members of the Bar with his encouragement. The CJ’s contribution in sharpening skills of the next generation of the HC was unforgettable.

The CJ had a distinct style of writing a judgment. Mr. Prasad recalled that in one of the verdicts the CJ had stated that “the principles of natural justice are like a clear sunshine which pervade and permeate into the deepest dark corners, and kill the germs of injustice”. In another judgment, he had observed that not only the three branches of the State but the State itself rests and progresses on the faith of its people, the AG shared.

Lauding the CJ’s efforts in upholding the natural rights of a citizen, the AG cited a recent verdict. A businessman accused of defaulting on loan repayments approached the HC challenging classification of his bank as fraud account. The CJ said that the principle of ‘audi alteram partem’ (let the other side be heard as well) should be heard into the Master Directions on Fraud and the businessman should have been given an opportunity to explain his case.

In a case of rape and murder of a nine-month-old in Warangal, the CJ commuted the death sentence awarded to the convict. He observed that choosing a middle path of punishment permits the courts to balance twin aspects of limiting the personal liberty of the convict without depriving him of his life, the AG said.

Delivering verdict in a plea challenging government’s decision to demolish Irrum Manzil, the bench led by the CJ restrained the government from doing so. The CJ noted in the verdict that while it is important to plan for the future, it is equally important to protect, preserve, and promote the past, the AG said.

The outgoing CJ thanked all Justices of Telangana HC, members of the Bar, AG and staff members of the HC for the cooperation they had extended in smooth functioning of the courts.