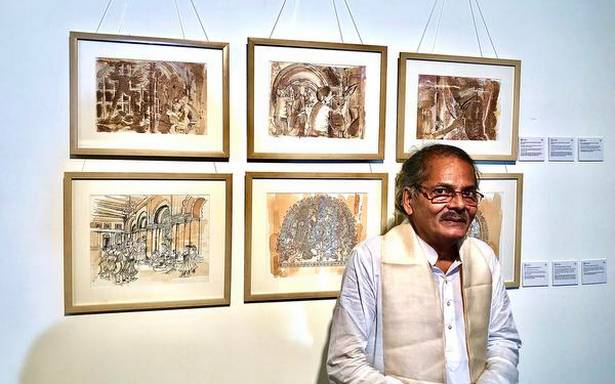 I began working on the illustrations some seven years ago, says descendant of Naba Krishna Deb

Last weekend saw the publication of 50 illustrations by Kolkata artist Prabir Krishna Deb who, through those works of art, has sought to tell the story of the Durga Puja that’s held at his ancestral home.

If you wonder what’s so extraordinary about his effort — considering that the city is home to a few thousand such celebrations, including those held by once-aristocratic families — it was his ancestor who began the festival of Durga Puja, making it a public event, in the newly founded British city of Calcutta back in the eighteenth century.

Until then, Durga Puja was largely a religious affair, confined mostly to the homes of zamindars; but the victory of the East India Company at the Battle of Plassey, in 1757, changed it all, deciding not only the future of modern India but also transforming Durga Puja into a major public event that it is today. That year, Naba Krishna Deb, who overnight became Calcutta’s wealthiest man and earned the title of ‘raja’ for having helped Robert Clive in the battle, decided to begin Durga Puja celebrations at his newly built palace — the rest, as they say, is history.

And now Prabir Krishna Deb, an eighth-generation descendant of Naba Krishna Deb, is seeking to preserve a bit of that history on paper. “There was a risk of the history being lost over time, so I decided to document it,” said Mr. Deb, 69, who is a student of the Indian College of Arts and Draftsmanship.

The 50 illustrations are also being exhibited at the Kolkata Centre for Creativity, where the book, Shobhabazar Rajbari — A Tryst with Heritage and History, was released last Saturday. “I began working on the illustrations some seven years ago, but the idea to put them together occurred more recently when I published a similar pictorial book about our family deity. That book was originally meant for family members but even the general public started showing interest in it. That’s when I thought of documenting the history of our Durga Puja,” Mr. Deb said.

The chief guest at Naba Krishna’s maiden Durga Puja celebrations in 1757 was Robert Clive himself. This grand event — there was music and dance, food and wine — went on to inspire wealthy Bengalis into organising Durga Puja at their homes and competing with one another in inviting high-ranking sahibs for the occasion — a practice that continued until the early decades of the twentieth century.

Naba Krishna Deb, since he had no heir for a long time, went on to adopt his brother’s son, Gopi Mohun. Later, though, when he fathered a son, Rajkrishna, through another wife, he began another Durga Puja across the road, either in 1788 or 1790. Subsequently he split his wealth between the two homes — boro taraf (loosely translated, from the elder wife’ side) and chhoto taraf (younger wife’s side).

Mr. Deb, the artist, belongs to the chhoto taraf. The wing of the chhoto taraf palace where Durga Puja is held — intricately depicted by him in one of the illustrations — is said to have been designed by the grandson of the architect of the Taj Mahal.

The artist’s next project will be on the various forms of transport used by Naba Krishna Deb and his descendants. “Naba Krishna was the first in Calcutta to use the elephant as the mode of transport. He was also the first to use the palanquin for personal transport. Then the horse-drawn cars came. The family was also the first to own motor cars in the city. In a way, they shaped modern transport in Kolkata and I am going to document all that,” said Mr. Deb.