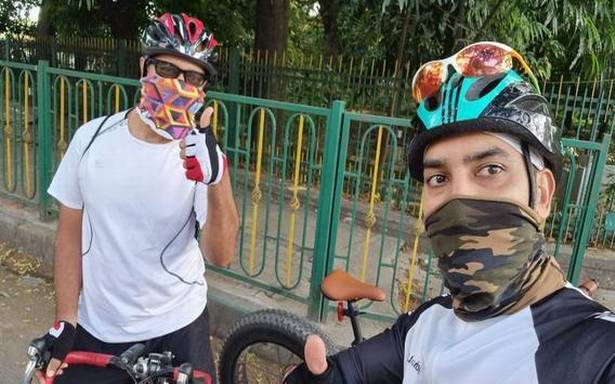 Divi K wanted to take some home-cooked food for her elderly aunt, who was unwell, on May 1 in Bengaluru. She stays in Halasuru which is about 20 kilometres from her aunt’s house in Yelahanka. Due to the lockdown in Karnataka, she was unable to drive there herself. She could not find a delivery service either. That is when she came across a helpline number for Relief Riders, a group of cyclists who are volunteering to deliver medicines and other essentials, including food, to vulnerable people in the city. Within minutes of dialling the number, a volunteer — Kunal Bohra, a second-year BCom student — reached her doorstep. The food was delivered within an hour.

Relief Riders is headed by Bengaluru’s ‘bicycle mayor’ Sathya Sankaran, who is a part of BYCS, a Dutch social enterprise that heads a worldwide network of international cycle mayors. Along with the Bengaluru cycling community, he formed Relief Riders during the first wave of the pandemic. With the city in the midst of a two-week lockdown, the cyclists returned to volunteer again. Now, more cities have joined the programme.

The programme kicked off in Chennai from May 3. Felix John, Chennai’s bicycle mayor, says, “We are aware the situation is much worse than last year. Hence, it’s probably riskier for us to move around. But the people in need of essentials and medicines have also grown which is why we decided to volunteer.”

In Bengaluru, the team serves from 6 am to 10 am (on other times as well, in case of emergencies) every day. Once a person in need contacts a helpline number, the request is shared on a WhatsApp group. Then, whoever is available to help, takes it up. Volunteers have made about 90 deliveries so far. They also check on people with physical and mental disabilities. The Bengaluru team has tied up with the elders helpline (1090) as well.

“There are about 190 volunteers in Bangalore and 29 in Hubli-Dharwad,” says Sathya. Five more cities — Mumbai, Chennai, Gurugram, Hyderabad, and Belagavi — have joined the programme.

The Hyderabad edition of Relief Riders, which started on May 1, has done about 10 deliveries so far. “I think the number of requests we get will increase as the helpline numbers are just beginning to reach more people,” says Santhana Selvan, Hyderabad’s bicycle mayor.

“The disease is now believed to be airborne. So, we are extra careful this time. There are a few guidelines one has to agree before signing up to be a volunteer,” says Sathya.

In Gurugram, Vineet Chopra and his local cycling group, the Rock Riders, formed a couple of years ago with a bunch of people in his apartment complex, are volunteering under the Relief Riders banner. “We have been getting about 40 to 50 calls a day, most asking for oxygen cylinders or Remdesivir. Sometimes, whole families are COVID positive, and even the chemist won’t go to these houses,” he says.

Payments are usually cashless. But, occasionally, volunteers help with cash transactions if an elderly person is unfamiliar with digital payments. Santhana Selvan says a volunteer in Hyderabad even paid for medicines as the person in need of it could not afford them. “It’s really heartening to earn the gratitude of such people,” he adds.

(With inputs from Sunalini Mathew)