For his now critically-acclaimed second Marathi feature film, Chaitanya Tamhane didn't want an actor who could sing, but the other way round. Modak, 33, had to relive on reel his real journey and struggles of becoming a classical vocalist 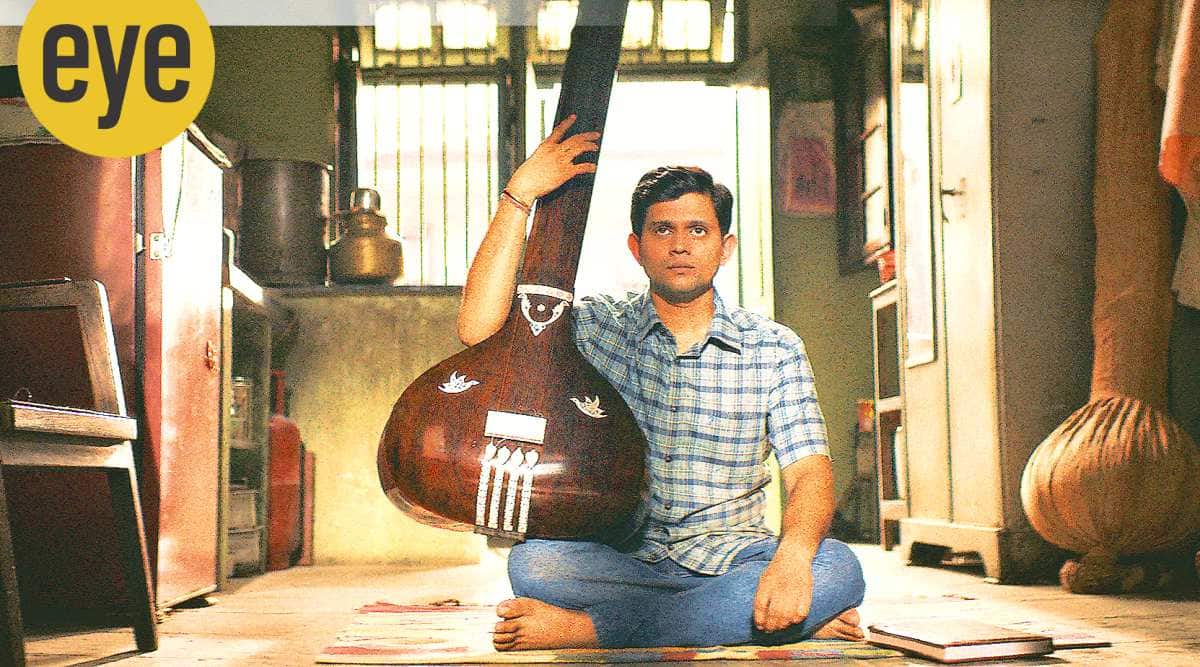 Chaitanya Tamhane’s film The Disciple opens with Pt Vinayak Pradhan (essayed deftly by Jaipur-Atrauli gharana classical singer Pt Arun Dravid) on the stage. The ageing vocalist, from Alwar gharana, is immersed in the glorious Jaunpuri (Jhanana bichhua baje), a raga that evokes wonder and bhakti bhaav. His accompanying “disciple” looks on in reverence, with eager nods and eyes that capture his desire to perform like his guru one day. Moments later, the setting shifts to the guru’s room, who, with a teacup in hand, breaks down the raga to his promising shishya as Sharad Nerulkar (played by Hindustani classical artiste Aditya Modak), tanpura in hand, rote-learns and sings.

Tamhane’s sophomore Marathi feature (released on April 30 on Netflix), since his National Award-winning Court (2014), has been this year’s most awaited film after it premiered at last year’s Venice International Film Festival. The film revolves around Nerulkar who, in keeping with traditions, follows the teachings of his guru. His cloistered existence and learning is at odds with the demands of life — a game of cricket, eagerness to find love, or anxieties that a job would take him away from music. It is a story of deep reflection, of flaws, failures and frustrations, and, yet, striving and seeking to be better. In the end, it is this journey and not our successes that make us who we are.

Director Tamhane and the film’s music adviser, tabla exponent Aneesh Pradhan, were concerned how a musician would be able to evoke and emote reverence and a genuine sense of admiration, on screen, for someone who’s not his own guru. “So, I went to Arun-ji’s house a few times, to sit at his feet and learn from him, and imbibe his teachings before the shoot began. This was done so that I could genuinely feel respect for him as a guru. Arun-ji learnt from (the late Hindustani classical singer) Kishori Amonkar, so, there were many new things for me to explore and understand,” says Mumbai-based Modak, 33. The film shows the guru-shishya parampara of the Indian classical performative-arts world, where the disciple in lieu of learning from the guru cares for him, massages his aching legs and back, bathes him and pays his doctor’s fee.

Modak’s Nerulkar falters while singing Sampoorna Malkauns and is pulled up by the guru. “It’s a new raga for me,” he says. The raga, a heptatonic version of the meditative raga Malkauns, is often performed by Jaipur-Atrauli gharana practitioners. And so, it never featured in Modak’s Gwalior gharana training. The authenticity of the moment is kept intact. As a musician, Modak does not think like Nerulkar, and yet, for him “it’s a universal story, in terms of the dilemma, the internal struggle that any artiste goes through,” he says. As a “classical musician, there is a struggle” to remain pure to the form as well as “make it likeable to the audience and relevant to the current times,” adds Modak, who, in real life, tries to strike a fine balance. There is “the fear”, he says, of turning the “traditional” form into “something superficial to make it relevant for the masses”.

Tamhane often sent him back to relive this personal dilemma to essay the role. To remain steady on his path, in the film, Nerulkar listens to the lectures of a famed musician, Maai or Sindhubai Jadhav (voiceover by the late National Award-winning filmmaker Sumitra Bhave). Among them is an essential lesson which forms the crux of the film: “Indian classical music is an eternal quest. And to embark on that quest, you will have to surrender and sacrifice. If you want to walk this path, learn to be hungry and lonely,” Maai says. Her quivering voice and wise words, that tell of her age and experience, along with tanpura’s drone accompany Nerulkar’s thoughts as he rides his motorbike along the streets of Mumbai, where the film is set.

Classical music came to Modak as a toddler at a Mumbai daycare centre. The centre was at the house of classical musician
Pt Chandrakant Parkar. As Parkar taught his students, little Modak imbibed the music in the other room. When he was five years old, he moved to Parkar’s class. Later, he learnt under the tutelage of Pt Pradeep Dhond. At 17, he started training with Pt Ram Deshpande of the Gwalior gharana. Deshpande, in particular, told Modak that he would only teach if Modak would not treat music as a hobby. “He didn’t like that I was pursuing an academic career, and said if my academics would affect music then he wouldn’t teach. I liked academics. He wasn’t happy but I convinced him,” says Modak, who completed his chartered accountancy on the side.

At the auditions three years ago, Tamhane wasn’t looking for an actor who could sing. It had to be the other way round. “You can’t fake this music on screen,” says Tamhane, who told Modak, the camera reads your mind. Modak had a corporate job when a casting director reached out to him. “I thought it was a prank. Why would anyone call me?” says Modak, with a laugh. He ignored it until he was contacted again. Modak was asked to sing for his audition. Tamhane was happy, except he was unsure of the appearance. Modak looked older and overweight than Nerulkar’s character. He lost 20-23 kg in three months to look the part.

Tamhane taught bit by bit, ensuring Modak didn’t buckle under the strain. “I’m a forced-method actor. Chaitanya took many workshops, taught me what to think, to relive a particular moment while doing a scene, it was all about the mind, and he allowed me the flexibility of time to do that,” says Modak about prepping for his noteworthy acting debut. For the film’s music, Modak says, Aneesh Pradhan wanted to balance tradition with relatability. Children learn the basics of Yaman raga (Sakhi eri aali piya bina), a young Nerulkar learns a bandish (composition) in Bhopali from his father. He graduates to learning the meditative Malkauns from his guru, presents the romantic Bageshri in a competition, and, years later, performs the dramatic raga Hameer.

All the pieces and the moods they evoke represent Modak’s state of mind and his growth. Yet, after endless explorations, elaborate and complex improvisation, he says, it was difficult to lip-sync the pieces on location in the exact same manner they were recorded. “The same piece is presented differently every time it’s attempted, even by the same musician, because a raga evolves. Even I didn’t remember how I had sung it earlier,” says Modak, who’s now returned to his riyaaz and being a full-time musician.