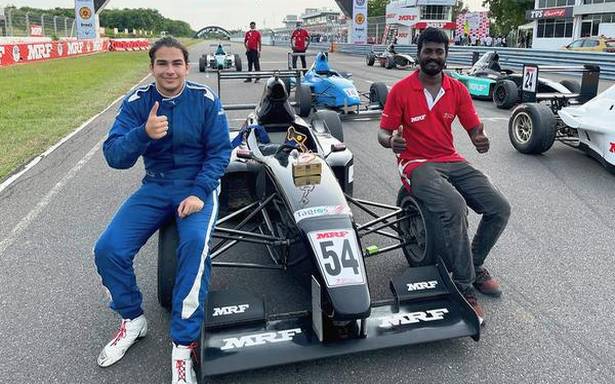 Schoolkid Dillon Zachariah from Chennai began racing with a steering wheel on his PlayStation three years ago. This weekend, he finished third on the Madras Motor race track

As the black race car roared across the finish line this Sunday, at 180 kmph, the driver could hardly believe what he had just done.

Dillon Zachariah, 18, had finished third in his debut race in the prestigious MRF National Championship, held at the Madras Motor Race Track. An eSports driver, this was just Dillon’s second race weekend in a race car.

Explaining why this finish was unusual, Aditya Patel who drives for Audi India Motorsports says, “Dillon has come a long way in a very short span of time. From his first win in the X1 eSports series to his first podium in the Formula 1600 in only two years is a big achievement. His passion and dedication for motorsport will take him a long way.”

Usually, a racing driver progresses from gaming to karting and only then onto full fledged single seater race cars.

Dillon’s journey began three years ago, when his brother bought a steering wheel for their PlayStation 4 — to play Formula 1 2018. He fell in love with car racing, playing for hours on end. In 2019, he saw a social media post about the XI Racing eSports League. He participated and was one of the youngest and fastest drivers, winning the Delhi leg.

Here he was introduced to two of India’s best known racers: Aditya Patel and Armaan Ebrahim, founders of the X1 Racing League. The two met Dillon over a couple of weekends, and watched him drive on a simulator. They were impressed by his talent, but also told him that he needed to lose weight and be much fitter, pointing out that driving a real race car was physically much more demanding than a simulator.

The duo, however, soon began to explore eSports too. When real racing came to a standstill in 2020, and the pandemic grew increasingly severe, Aditya and Armaan launched a charity eSports event called Ultimate E, with celebrity guest drivers like Arjun Maini, Kush Maini and Narain Karthikeyan. Dillon helped Armaan and Aditya with streaming, commentating, and even hosting of lobbies (a lobby is where participants meet up to race. The host sets the rules).

Towards the end of 2020, real racing slowly started making a come back. “It became clear that it was time for me to get into the car and show what I’m capable of,” says Dillon. By January 2021, he began working out for four hours a day, playing badminton and spending hours in the gym. He also did intermittent fasting and ate only from 1pm to 7pm. By March 2021, he had dropped his weight from 100 to 76 kilograms.

His first real car race was at the Meco Motorsports FJRS 2021, held at the Kari Motor Speedway in Coimbatore, in August. Despite no previous experience, Dillon was quick enough to be amongst the top racers, finishing fourth in three out of five races. He was fifth overall in the championship, in a field that included racers of international experience.

Dillon says, “None of this would be possible without Aditya Patel, who has been guiding and mentoring me: showing me the nuances of tyre pressure, brake pressure, track temperatures etc. Motorsports is also an expensive sport and I wouldn’t have been able to participate in these races if it wasn’t for the trust shown in my abilities by my sponsors Tagros. They’re amongst a handful of people who believed that my performance in eSports would translate onto the race track.”

After the Meco Motorsports FJRS 2021 event, Dillon learnt about the MRF Formula 1600 category at the MRF MMSC FMSCI National Car Racing Championships, conducted at Chennai on September 25 and 26. At the championships, Dillon finished third in his first race, scoring his first podium against a field that consisted of many pros.

Armaan says, “This last weekend, we stuck to a plan of gradually improving through each practice session, with the goal of him not making mistakes and gather as much experience as possible, as track time was limited. With some good fortune and a mature approach he ended his very first race on the podium.”

Dillon adds with a smile,”The MRF National Car Racing Championships continue with another three legs at MMRT in December 2021, January 2022 and February 2022. I hope to bring more wins back to my city, Chennai.”