A close associate of Kailash Balasaheb Ghadge Patil says the 38-year-old Shiv Sena MLA from Osmanabad was hoodwinked into accompanying the entourage of party MLAs into Gujarat.

But the lawmaker outsmarted his ‘kidnappers’ and under the cover of darkness and outgrowth of shrubs along the Mumbai-Ahmedabad highway escaped unnoticed near Talasari, a town in Maharashtra’s Palghar district, just 12-13 km from the Gujarat border.

Had it not been for his presence of mind, Ghadge-{atil would have been in Guwahati now after spending a night in Surat, one of his associates tells Prasanna D Zore/Rediff.com.

“He (Ghadge-Patil, pictured below) told me (his associate) that he was asked by aides of Eknath Shinde saheb to come to a dinner at a dhaba somewhere along the Mumbai-Ahmedabad highway.

He was told to bring along another Shiv Sena MLA in a car at around 11 pm on June 20 (the day elections to the Maharashtra legislative council took place) unaware of what lay ahead of him.

It was only when the vehicle he was travelling in took a turn after crossing Ghodbunder Road that Patil saheb smelled a rat. He knew they were not speeding towards any dhaba.

When the car did not stop even after covering 60-70 kms he knew for sure that he was kidnapped and they were heading somewhere outside the state and not for any dhaba dinner. 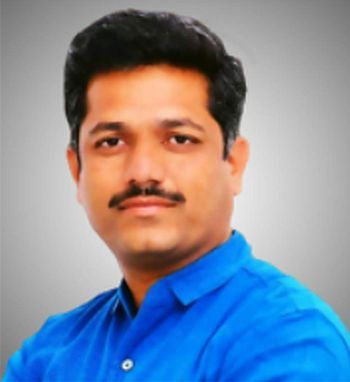 Fortunately, the entourage of cars ahead and behind him stopped somewhere in Talasari because a few MLAs wanted to answer nature’s call.

Patil saheb knew this was his chance to make a move and like others he too stepped out of the car.

After chatting a while with some of his associates he smartly excused himself, seeking some privacy to relieve himself, and hid behind some bushes along the highway.

Thankfully, nobody noticed his absence when the entourage began their journey towards the Gujarat border, or perhaps, they must have thought it riskier to launch a search for a missing MLA, lest it created a commotion, as they were escorting almost a dozen of them to Gujarat.

After ensuring that the cavalcade of cars had moved on and covered some distance, Ghadge-Patil came out of the bushes and walked almost 4-5 kilometres in the opposite direction towards Mumbai.

When he realised he was tiring himself out, he decided to hitchhike his way towards the city. He was fortunate to have got help from a kind biker who dropped him near Virar (a township north of Mumbai) from where he sought a truck driver’s help till Dahisar check naka (a checkpost at the border between Mumbai and Thane districts) at around 1.30 am (the intervening night of June 20-21).

Patil saheb then called some of his friends in the Shiv Sena and was taken to meet the chief minister. He then briefed Chief Minister Uddhav Thackeray about his ordeal as he had no idea then that Shiv Sena MLAs were whisked away to Surat in an apparent bid to split the Shiv Sena.”