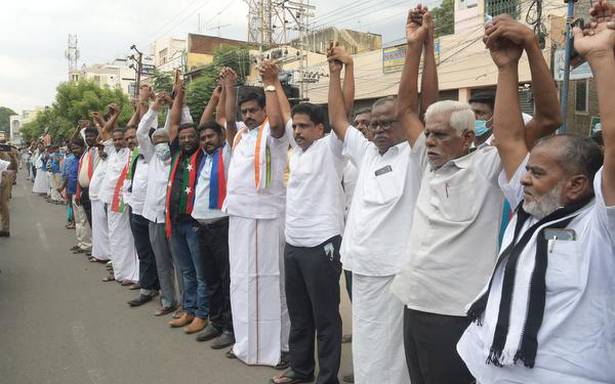 The arrest of thinkers, social activits and writers in connection with the Bhima Koregaon case is not just a blantant violation of human rights, but a threat to intellectuals who speak against Hindutva forces, said Madurai MP Su. Venkatesan on Wednesday.

The MP’s remarks came at a human chain protest demanding release of the arrested persons in Bhima Koregaon case. The human chain started at St. Mary’s Church and wound its way to Crime Branch junction.

The Centre had demonstrated that it would go to any extent to suppress the voice of opposition. “Our demand is not just the release of 15 people arrested under the Unlawful Acts Prevention Act and denied bail for months. But, it is a protest against stifling of all voices for democratic rights and save them,” the MP said.

The protest was organised by Tamil Nadu Untouchability Eradication Front.