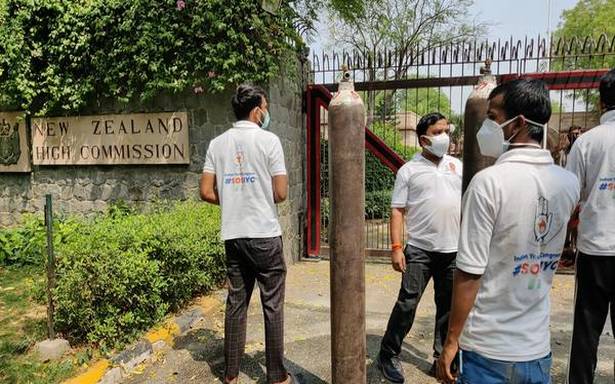 IYC officials said that the Indian Youth Congress president has a team of 1,000 members dedicated to responding to calls of help for COVID-19 patients.

As the second COVID-19 wave stretches the healthcare infrastructure to breaking point, Indian Youth Congress president B V Srinivas and his team have emerged the go-to people, quickly responding to SOS messages and arranging for oxygen, medicines and even plasma.

The word has spread. And people desperate for help as the pandemic spreads, particularly in the national capital and its suburbs, have been directly calling IYC members or tagging them and Mr. Srinivas on social media platforms.

IYC officials said that he has a team of 1,000 members dedicated to responding to calls of help for COVID-19 patients. They are doing everything, from arranging plasma, oxygen, medicines and equipment to beds, the officials said.

Humanitarian work is primary, said Mr. Srinivas, whose team has been praised for taking up a number of COVID-19 relief works.

If the Congress was in power, it could have done much more for those in need, added the 40-year-old.

Though appointed IYC president last year, Mr. Srinivas, sources said, quickly gained the attention of the party leadership as he and his organisation worked relentlessly to help migrants reach their native places during the lockdown and took up campaigns against the Centre’s new farm laws.

Raised in a middle-class family in Karnataka’s Shivamogga district, Mr. Srinivas, before coming into politics, was a cricketer and even played in the state Under-16 team.

However, cricket did not work out for him and he joined the National College in Basavanagudi. It was from here, as a National Students’ Union of India member, Mr. Srinivas begun his political journey, and over the years, started growing in rank, making his way into state-level politics.

Known to be a grassroot-level worker, Mr. Srinivas was appointed secretary in the IYC in 2014 and within a few years was made general secretary. In 2018, former Congress chief Rahul Gandhi appointed him vice president and after Keshav Chand Yadav resigned as president following the party’ 2019 Lok Sabha poll debacle, Mr. Srinivas took up the responsibility.

“For me it was always about social and humanitarian work. But some people seem to be using the COVID-19 pandemic as an opportunity to achieve their vested interest and treating it like an event,” said Mr. Srinivas, who has also led the IYC into protesting the contentious Citizenship (Amendment) Act.

The Congress and the IYC are trying their best to help COVID-19 patients and their families, he said.

“But we have very limited resources. If we had more, we would have done more,” Mr. Srinivas said.

“Because we (Congress) are not in government, we are not being able to do more for the people of the country. Even if we wish, we are not able to do it,” he said.

The IYC president demanded that strict action be taken against those who are using the pandemic for their vested interests. “This will also help improve the situation,” Mr. Srinivas said.

Sources said Mr. Srinivas has been praised in crucial meetings by Congress president Sonia Gandhi, Rahul Gandhi and senior leader Priyanka Gandhi Vadra. Mr. Srinivas said that during a meeting in March in the presence of Rahul Gandhi a six-month roadmap was prepared and it stressed on providing all help to those affected by COVID-19.

External Affairs Minister S Jaishankar had said that his ministry had checked with the Philippines embassy and they had no COVID case.

The Ministry of External Affairs had said it is in continuous touch with all foreign embassies in India and responding to their medical demands, especially those related to COVID-19.

MEA Spokesperson Arindam Bagchi had said the response to medical demands of the embassies included facilitating treatment in a hospital even as he urged all not to hoard essential supplies including oxygen.

India for the last couple of days has been recording over 3.50 lakh daily coronavirus cases and the fatalities have also increased.