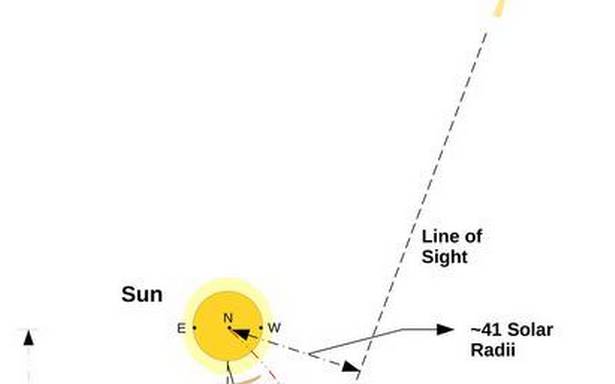 They attribute discovery to unique wideband, low frequency capabilities of the radio telescope

Astronomers attached to the Indian Pulsar Timing Array (InPTA) project have detected the effect of a Coronal Mass Ejection (CME) from the sun on pulsars using the upgraded Giant Metrewave Radio Telescope (uGMRT).

This space weather effect (‘space weather’ refers to the environmental conditions in space as a result of solar activity) on a pulsar — the most accurate clocks in the universe — was detected in the signal from a millisecond pulsar itself and is the first of its kind observation ever reported, claim astronomers associated with the InPTA project.

They attribute the discovery to the unique wideband and low frequency capabilities of the uGMRT, which is one of its kind among radio telescopes in the world. The observations were published in the prestigious international journal Astronomy & Astrophysics earlier this month.

“The sun produces massive explosions as its interior churns and twists its magnetic field. These massive eruptions, called Coronal Mass Ejections, travel in space along with the solar wind, consisting of charged particles. Such an explosion is akin to a cannon firing a cannonball. The CMEs, interacting with this solar wind, can increase the density of electrons between the earth and the sun,” explains Bhal Chandra Joshi, astrophysicist and faculty member at the National Centre for Radio Astrophysics, Tata Institute of Fundamental Research in Pune.

Mr. Joshi said such changes in the property of the medium between earth and sun affects the accuracy of measurement of periods from pulsars, which are rapidly spinning neutron stars left over after a supernova explosion ends the star’s normal life, leaving behind a dense core. Pulsars give off bursts of radiation, alerting astronomers to their whereabouts and motion.

“As they rotate, the beams of their radio waves sweep the sky, which are seen as radio flashes with a high degree of periodicity. InPTA astronomers uncovered the evidence of such a fireball using high precision pulsar timing with the uGMRT,” said Mr. Joshi, adding that the observation was possible only due to unique wideband and low frequency capabilities of the uGMRT.

InPTA records signals from these clocks using the uGMRT, once every 14 days, to time these clocks to discover very low-frequency gravitational waves, which were predicted by Albert Einstein and are ripples in space and time and change the way clocks tick as these waves pass by.

InPTA, along with other international pulsar timing groups, is a member of the International Pulsar Timing Array (IPTA) consortium aiming to discover a very low-frequency spectrum of gravitational waves (GWs).

“While higher frequency GWs are being discovered by terrestrial detectors, like LIGO and VIRGO, the low-frequency gravitational waves can be discovered using changes in the clock period of pulsars. Discovering GWs requires determining the time of arrival of the radio flashes from pulsars to an accuracy of tens of nanoseconds. But, changes in the medium between us and stars produce time-varying delays and makes this precision worse,” says Mr. Joshi.

This is where the uGMRT helps to improve the precision. InPTA astronomers can measure these changes with an unprecedented precision because of the unique seamless frequency coverage of the uGMRT from 300 to 1400 MHz.

Earlier, the uGMRT’s extraordinary precision had helped InPTA astronomers to uncover the effect of a solar explosion in February 2019. At the time, the astronomers had discovered an increase in the delay in the signal from a millisecond pulsar ‘PSRJ2145-0750’.