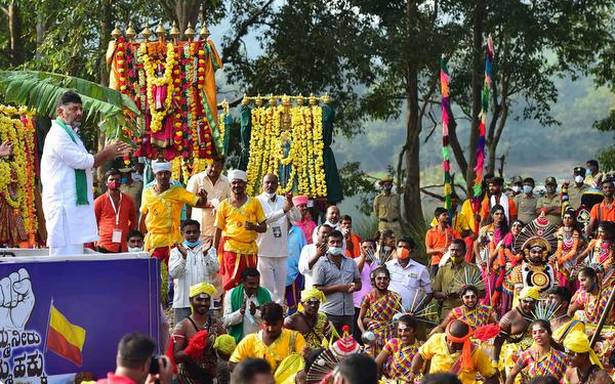 State Government did not want to take any action that will give more political mileage to the Congress, besides showing the BJP in a bad light

Sensing that the padayatra of the Congress over the sensitive issue of the Mekedatu project turned out to be politically tricky, the BJP Government changed its strategy and desisted from scuttling the event on Sunday as senior party leaders felt that such a measure would have given more political mileage to the Opposition party besides showing the ruling party in a bad light.

There has been a fight over political optics since the announcement of the padayatra by the Congress, resulting in a tightrope walk for the Basavaraj Bommai-led BJP Government.

While the Government’s failure to prevent a massive congregation on Sunday could be scorned at by the common people affected by the stringent weekend curfew measures, any action against Congress leaders could lead to sympathy among the electorate for the Opposition party in the Old Mysore region.

“The failure to take action sends a wrong signal to the general public that the lockdown measures and fines for disobeying rules are not meant for politicians,”a Government source said.

Soon after the padayatra was launched at Sangama, Mr. Bommai held a closed-door meeting with several of his Cabinet colleagues to devise a strategy to mute the Congress’ effort. The public perception of a perceived failure of the Government was also discussed, sources said, adding that exposing Congress’ adamant stand over the pandemic was also discussed, sources said.

The Karnataka Government, sources said, was expecting the padayatra to fizzle out in a couple of days as tougher measures that are closer to lockdown are expected to be announced by the Centre in a day or two.

In the run-up to the padayatra, Government functionaries, including the Chief Minister, had warned of action and cited rules to prevent such a huge congregation, hoping the padayatra could be cancelled. However, despite a notice issued to Congress leaders on Saturday, the party managed to successfully start the padayatra on Sunday morning that also attracted a huge crowd, mostly not following COVID-appropriate behaviour in times of rising number of infections.The Government at the face of it looked helpless.

Government sources said: “By taking action against the Congress, the BJP Government did not want its Opposition to glorify the action and play the sympathy card. On the otherhand, the Government wanted to expose the Leader of the Opposition Siddaramaiah and Congress leader in the Rajya Sabha M. Mallikarjun Kharge as those leaders who do not abide by the law of the land”. As the principal Opposition, the Congress will lose moral ground later to question the Government if the COVID-19 numbers increase, sources said.

While the notice has been issued to Congress functionaries, action such as fine could be followed up later, sources said, adding that not to react to the situation was also part of the Government strategy.

Home Department sources said that the decision to not initiate anyaction against the padayatra was taken since there were women, actors, and religious leaders in the congregation. “Any mishandling on the ground would have put the Government in a tight spot. They would hold the Government accountable for any trouble.”

BJP leaders were apprehensive that any use of force to scuttle the padayatra may project them as those opposed to Karnataka’s interests with respect to protecting its share of the Cauvery waters, at a time when the party’s national unit is making efforts to find a foothold in Tamil Nadu.

Minister for Major and Minor Irrigation Govind Karjol told reporters that taking action against COVID-19 violations would also not offer any solution, indicating the changed strategy of the Government.