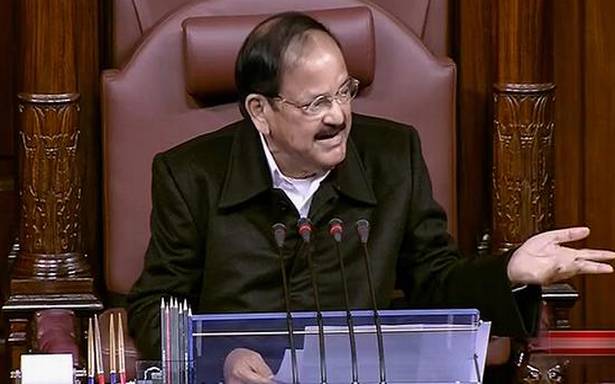 The Rajya Sabha Secretariat has sought to counter the Opposition narrative on the winter session of Parliament. Chairman Venkaiah Naidu, a statement said, had made all the necessary efforts to enable normal functioning of the House.

The statement was essentially to counter Leader of Opposition (LoP) Mallikarjun Kharge’s comment that while the Opposition and the government were wrestling, there was no one to mediate in the fight. This is the first instance in Mr. Naidu’s tenure as the Chairman of the Upper House that such a statement has been issued.

The statement stressed that Mr. Naidu had conversations with leaders from both the sides, and on several occasions in the House, he urged both the sides to resolve the matter amicably through discussion.

“It is informed that initially it was proposed to the Hon’ble Chairman that the Leader of the Opposition would express regret on behalf of all the 12 suspended Members on the Floor of the House,” it stated. But subsequently, the Opposition parties said that the other parties whose members were among the suspended would disagree with the LoP in case he expressed regret on behalf of all the suspended. “It was even suggested that if all parties concerned were not on board, regret could be expressed on behalf of the parties willing to do so. But nothing happened thereafter,” it noted.

The Chairman, it observed, also suggested to the government to move a motion for the termination of the suspension in case such a regret was expressed. The precedent of former LoP Arun Jaitley expressing regret on behalf of seven members suspended (no BJP members suspended) for their misconduct during the passage of the Women’s Reservation Bill in 2010 was also cited during the discussions.

The Opposition parties had refused to participate in the investigation into the events of the monsoon session. There was no progress, it asserted, due to shifting positions of the concerned and perhaps, due to unwillingness to regret the misconduct of suspended members and lack of agreement among the parties concerned on regretting the incidents that led to suspension.

“It is hence, incorrect and misleading on the part of concerned to suggest that the Hon’ble Chairman did not take initiative to resolve the stalemate. Hon’ble Chairman could not have forced any section of the House to take a particular view in the matter of suspension to resolve the stalemate over it even as he consistently engaged himself with both sides of the House to find a way forward for normal functioning of the House upholding its dignity and decorum,” the statement added.