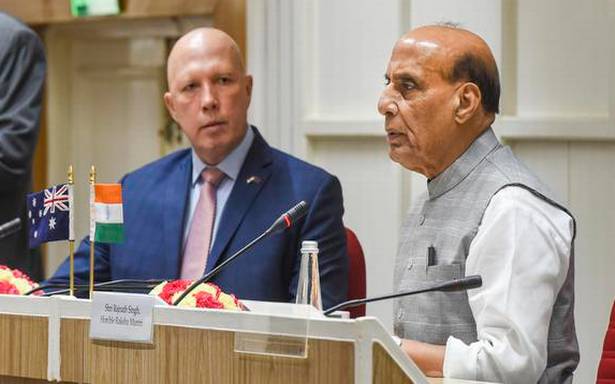 Rajnath Singh said both sides will expand military engagements. The Australian minister referred to India’s role in the region as “essential”.

India’s strategic partnership with Australia is based on “free” and “open” Indo-Pacific region, said Defence Minister Rajnath Singh on Friday. Welcoming his Australian counterpart Peter Dutton who is here for the inaugural ministerial “2+2” dialogue, Mr Singh said both sides will expand military engagements. The Australian Minister referred to India’s role in the region as “essential”.

“Both of us are keen to work jointly to realise the full potential of the India-Australia Comprehensive Strategic Partnership. This partnership is based on our shared vision of free, open, inclusive and rule-based Indo-Pacific region,” said Mr.Singh in his remarks at the joint press statement.

The two ministers held a round of discussion on bilateral defence cooperation and expanding military engagements “across Services” that will enhance defence information sharing, cooperation in emerging defence technologies and logistics support. The discussion on the overall defence cooperation with Australia took place even as both sides conducted ‘AUSINDEX’, a bilateral maritime exercise which concluded on Friday. The exercise included complex surface, sub-surface and air operations involving ships, submarines and Long Range Maritime Patrol Aircraft of India and Australia. Australia joined the Malabar Exercise in 2020 and Canberra is keen that India join its biggest war games ‘Exercise Talisman Sabre’ in 2023.

During Friday’s bilateral talks, Mr Singh invited Australian industry to take advantage of India’s liberalised FDI policies. Both the ministers agreed on “co-development and co-production” of critical components. “India’s leadership is essential to Australia’s Indo-Pacific strategy. We share one of the world’s important oceans. We both want a stable, resilient, secure and strategic neighbourhood,” Mr Dutton said obliquely referring to the Beijing’s influence over the South China Sea that is of crucial importance for Australia.

It is understood that Australia has to deal with growing expectation that it should assert its international maritime rights over the Indo-Pacific region in view of Beijing’s activities in South China Sea. The visit of Mr Dutton is part of the Indo-Pacific tour of that he and Foreign Minister Marise Payne are currently undertaking. The visit began with Indonesia and after the consultations here, will cover South Korea and the United States where they will engage the US Secretary of State Antony Blinken and Secretary of Defence Lloyd Austin.