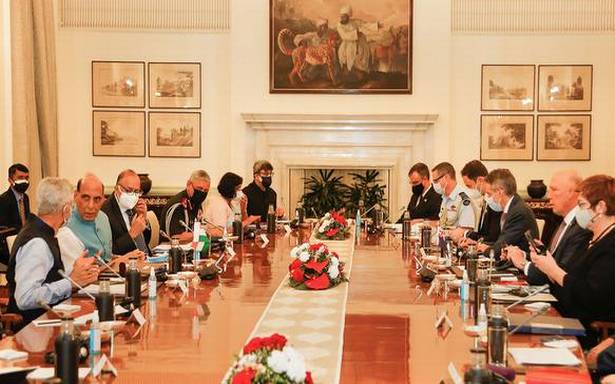 The FTA — Comprehensive Economic Cooperation Agreement (CECA) — was taken up during the “2+2” discussion between Foreign and Defence Ministers last week. Foreign Minister Marise Payne had said here India and Australia were working towards “early harvest” of the trade deal.

Both sides are reportedly working on a December 2021 time-frame on making significant progress on the deal.

A joint statement issued at the end of the inaugural “2+2” dialogue. said, “The Ministers appreciated the renewed commitment and progress made by both sides to achieve an early harvest announcement by December 2021 on an interim agreement to liberalise and deepen bilateral trade in goods and services, and pave the way for an early conclusion of a bilateral Comprehensive Economic Cooperation Agreement.”

The document referred to the trade deal as part of the CSP — Comprehensive Strategic Partnership. The trade agreement has been under discussion at least since 2011. The move was interpreted as Australia’s attempt to diversify its global trade interest, away from China. However, it did not materialise because of multiple factors including disagreement over tariff barriers and market access.

The FTA also came up during a virtual meeting last month between Mr. Tehan and his Indian counterpart Piyush Goyal in which both Ministers aimed for an “interim agreement” by December. The interim agreement can pave the way for the final CECA.