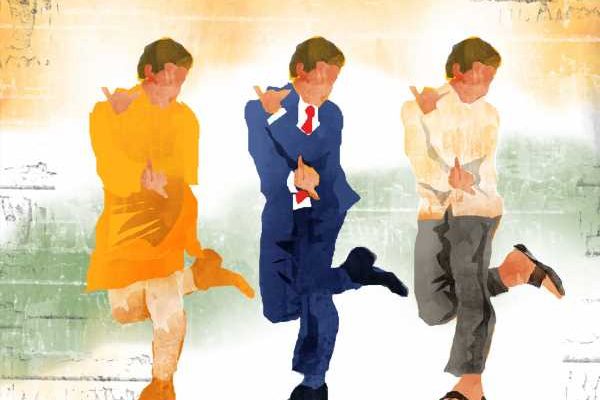 A bit of economic reforms stalled and decisions delayed — what Narayana Murthy spoke of — don’t hurt if a country’s compassionate and inclusive social fabric has survived intact; if the country is happy, observes Shyam G Menon.

Towards late September, 2022, when N R Narayana Murthy talked about economic activity stalled and decisions not taken during the government of Dr Manmohan Singh, it felt as though the ills of the present stood condoned in yet another deflection of onus to the past.

Few from the world of business articulate how insecurities of a different sort plague today’s India compared to the sentiment that prevailed prior to 2014.

The era of Dr Singh the finance minister and the years later of him as prime minister (not to mention, the years of Atal Bihari Vajpayee’s leadership) featured an India that was less provocative to its people.

It’s not the case now. It disappoints that this escapes the attention of our technocrats and corporate officials.

At the heart of this disappointment lay the question of what a nation actually is.

To corporate circles, it seems the country exists to serve GDP, profit and corporate social responsibility. Others imagine differently.

Let me attempt a simple outline. In ancient times, cultural homogeneity was among qualifying traits of nationhood. We know well, that is impossible in the 21st century.

Not just that, with the world this interconnected, digital communities defined by shared interests have sprung up.

They exceed physical borders. Against this backdrop, a modern democratic nation is closer to a set of culturally neutral, mutually acceptable rights around freedom that is also sensitive towards the realities of the present and forecasts for the future.

This way of life — it keeps evolving through experience and debate — and the democratic framework permitting it, are what we commit to defend.

It is easy to install money as prime deity in this arrangement.

After all, it is culturally neutral and seemingly rational.

However, that would be a mistake because money is basically heartless and the human being prefers a mix of the rational and the emotional in community life.

Thus, for example, within the realm of economics, affordability (the presence or absence of inflation) matters more to people, than a ruthless regime of self-worth measured by personal wealth.

Although our business media may project money as paramount, the reasons for nationhood surpass any single concern.

Often, it is about being able to live; loved, peacefully and securely.

Given this, viewing the country perennially through the lens of GDP is as inadequate as socially and culturally obtuse organizations engaged in a process, they call “nation-building.”

A bit of economic reforms stalled and decisions delayed — what Murthy spoke of — don’t hurt if a country’s compassionate and inclusive social fabric has survived intact; if the country is happy.

Much like a relaxed demeanour devoid of hyper-nationalism, cultural chauvinism and militarism don’t hurt.

Ten days before Murthy’s comment at IIM Ahmedabad, on September 13, the media reported that Finance Minister Nirmala Sitharaman had asked at a conference, why Indian industry wasn’t investing enough despite economic reforms and the enthusiasm shown by foreigners.

To my eyes, the fault isn’t so much with economic reforms, their pace or minutiae.

Those blinded by specialization are free to swim in that pond overlooking the larger ambiance in which, reforms are expected to work.

Our chorus of the compliant

What the minister does not notice is that India had been happier, earlier in the reforms curve thanks to a sense of optimism.

Currently, travel costs are up, inflation is a reality, generation of meaningful jobs (relevant to various age groups) is not high and government jobs are back to being prized for the security, salary and pensions they offer (it speaks volumes about what it is like to be on one’s own).

While Right-wing bhakts remain positive, many others have grave concerns over what is happening.

The country’s internal political balance has been damaged through a witch-hunt of Opposition parties (the latest is the Opposition denied chairmanship of important parliamentary panels).

Our peace of mind and some of our Constitutional freedoms have been impacted by social insecurities manufactured for political mileage.

Every now and then, one of the avatars of the hydra-headed Right will provoke to elicit rash response from quarters opposed to them.

Does this seem an inviting environment for investment or is it a portrait of gloom?

Unlike person and personal savings, business and business investments are not easily pulled out when things go wrong.

One has to either invest in a present and future one agrees with or, for the sake of the invested money, sing chorus to whoever is in power.

In India, we mostly appear to be the latter.

The Right-wing will dismiss such criticism as non-economic and irrelevant.

At the same time, they are no strangers to the impression made by non-economic aspects of nationhood advertised.

The propagandist imagery they resort to taps and promotes the potential resident in the non-economic.

What they decline to acknowledge is the measurability and monetary expression thereof, of the social insecurity they provoke.

Social experiments — Hindu Rashtra is one — are a race against that principle of every action having an equal and opposite reaction.

One can contest the parity in action and reaction but one cannot ignore the distress polarising acts cause.

Today, thanks to their capacity for cadre and choreographed displays, the political Right can get this country to dance to their music.

And once you jive, the conclusion is — the human being is happy.

Question is — minus incentive, cadre and choreographed compliance, does this country naturally dance to the music currently on offer?

The strange thing about the political arrangement our honourable finance minister belongs to is that it is high on appetite for GDP, economic reforms and militarism and low on appetite for actual modernity.

Sample this: On October 5, the media reported the RSS chief assuring minorities that they are safe.

What troubles is this — how can there be a convincing sense of security when it is the RSS that is assuring safety?

Such protective voice is usually the domain of government.

When the RSS (or any similar organization from any community) acts like a benevolent patriarch, it is troubling.

Can a country wishing to be an economic superpower and seeking investment for the same, get all that it wants when its everyday existence features such tendencies?

Isn’t this regression quantifiable and if so, wouldn’t a social climate of nervousness become part of investment risk? 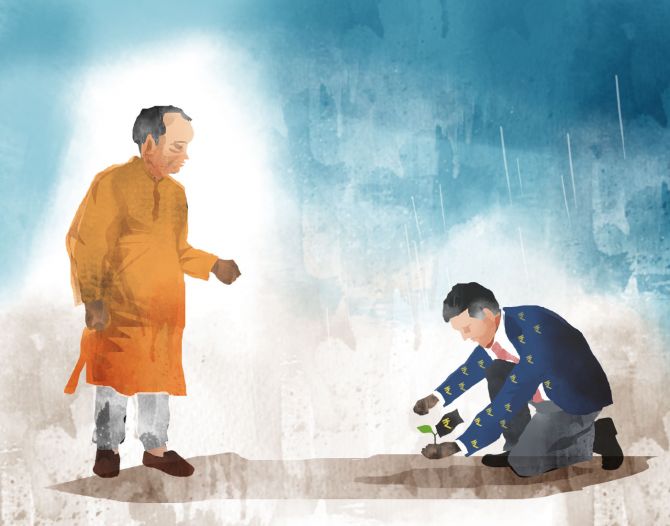 Stop faulting listeners’ ears; listen to the music instead

Perhaps the best index of this predicament is the continued flow of young people to study and work abroad.

Say what you may, they are not leaving solely for higher studies.

They are escaping to find space to grow up, evolve, live the life they want.

In India, out of civility one doesn’t tell the conservative lot that they should retire and relent.

At the same time, one must endure or escape the archaic views they perpetuate.

Worse, resistance to change has become the warhead weaponizing our society and its politics.

Had this not been the case, would the BJP have leveraged religion — among the world’s oldest and most inflexible institutions — to win elections?

In the years preceding the BJP’s triumph, the Congress was equally guilty.

Indeed, any party that uses religion, caste and such for electoral victory is ultimately traditional and conservative.

If Dalal Street can monetize the future profitability of India’s leveraged enterprises and send those scrips soaring, what makes the finance minister think that the negatives of India’s Right-wing politics and the social scene it represents, will escape description as economic risk?

How long will you fault the listeners’ ears for their failure to appreciate the music?