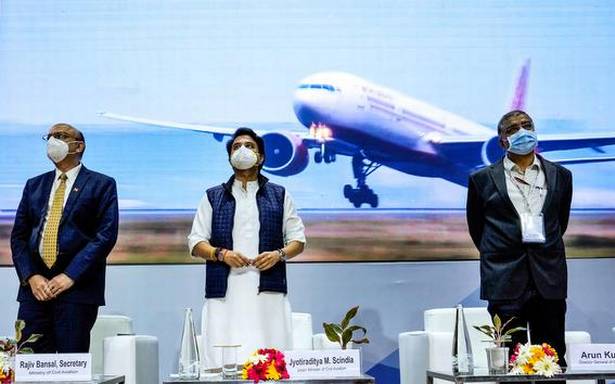 The Indian aviation industry was able to breathe a little easier in 2021 as domestic flight operations reached their pre-pandemic levels even though international services continued to remain curtailed due to Covid-related travel restrictions.

Air India’s sale to the Tata Group and arrival of Rakesh Jhunjhunwala-backed new airline Akasa Air in 2021 are likely to introduce more competition and change the dynamics of the Indian aviation sector in the coming years.

While the Ministry of Civil Aviation (MoCA) removed all capacity restriction on scheduled domestic flights on October 18, the lower and upper limits on domestic air fares continue to remain in place.

Both — capacity restriction and fare limits — were imposed by the MoCA from May 25, 2020, when scheduled domestic flights resumed after a two-month-long suspension due to COVID-19.

Though the MoCA announced on November 26 that scheduled international flights would resume from December 15, the decision was suspended on December 1 in the wake of spread of the Omicron variant of coronavirus.

Scheduled international flights have been suspended in India since March 23, 2020. Currently, special passenger flights have been operating between India and approximately 32 countries on the basis of air bubble arrangements signed with them.

With United States-based aircraft manufacturer Boeing making all necessary software rectifications in 737 Max plane to the satisfaction of Indian aviation regulator Directorate General of Civil Aviation (DGCA), the ban on the aircraft’s commercial flight operations was lifted after 27 months.

All Max planes were grounded in India by DGCA on March 13, 2019, three days after the crash of an Ethiopian Airlines 737 Max plane near Addis Ababa, which had killed 157 people, including four Indians.

Akasa Air — the new airline backed by ace investor Mr. Jhunjhunwala and aviation veterans Aditya Ghosh and Vinay Dube — got the no-objection certificate (NOC) from the MoCA to launch commercial flight operations in the first half of August.

With the DGCA giving its green light to Max aircraft in late August, Akasa Air signed a deal with Boeing on November 26 to purchase 72 Max planes.

Aviation consultancy firm CAPA said last month that the disruption in the Indian aviation sector due to Akasa Air will possibly be felt from 2024-25 onwards "once it has scale and achieves a competitive cost base".

Sections of SpiceJet’s employees went on strike outside the Delhi airport on September 3 and November 2 protesting against reduced salaries and its irregular disbursement.

SpiceJet chairperson and managing director Ajay Singh had told PTI in October that employees were being paid their full salaries on time and all issues related to their pays have been resolved.

SpiceJet is the only airline in India that has Max planes — 13 of them — in its fleet currently. In November, the budget carrier said it had entered into an agreement with Boeing to settle outstanding claims related to the grounding of 737 Max aircraft and its return to service.

CAPA said that risks for SpiceJet would remain "elevated without serious recapitalisation" and "long-term stability" could be achieved with recapitulation.

After much effort over the years, the Narendra Modi government was finally able to successfully able to sell debt-laden Air India in 2021 to a private entity.

On October 8, the Centre announced that Talace Private Limited — a wholly-owned subsidiary of Tata Sons — has beaten a consortium led by Ajay Singh by offering ₹18,000 crore to win the bid to acquire Air India.

Air India is expected to be finally handed over to the Tata group in the first quarter of 2022.

Tata Group already owns and operates two airlines — Vistara and Air Asia — in India. It is unclear if Vistara would be merged with Air India or not.

Similarly, it is unclear whether Air India Express — Air India’s wholly owned subsidiary that operates narrow-body aircraft only — will be merged with budget carrier AirAsia India or not.

Under Scindia’s charge, the MoCA has given a big push to the drone industry.

The MoCA on September 15 approved a PLI scheme for drones and drone components with an allocation of ₹120 crore spread over three financial years.

The PLI scheme came up as a follow-through of the liberalised Drone Rules, 2021, released by the MoCA on August 25.

The Indian drone industry will have a total turnover of up to ₹15,000 crore by 2026 as the government has given a major boost to the sector with the PLI scheme and the liberalised rules, Mr. Scindia had said on September 16.

Earlier this month, the winning consortium of Jet Airways said it wants to infuse funds in the airline and has approached the NCLT to fast-track implementation of the resolution plan approved by the insolvency court in June this year.

The consortium, in a statement, also said it plans to restart domestic operations at the earliest in 2022 as a full-service carrier.