‘The Chinese navy is large and expanding both in numbers and capability by the day.’
‘India too must take measures to safeguard its own interests, now and in the future.’

Admiral Biswajit Dasgupta was commissioned into the Indian Navy in December 1984 and is a product of the National Defence Academy.

He is a specialist in navigation and direction and has commanded frontline ships of the Indian Navy: The Missile Corvettes INS Nishank and the INS Karmuk, the Stealth Frigate INS Tabar and the Aircraft Carrier INS Viraat.

Besides serving as the Naval Assistant to the then Chief of Naval Staff, the admiral has held many operational and training assignments in his 35 year career at sea.

A graduate of the Command and Staff College Bangladesh, the Army War College at MHOW and the National Defence College, Admiral Dasgupta was awarded the coveted Yudh Seva Medal for his role in coordinating the evacuation operations from Yemen in 2015 under Operation Raahat.

Admiral Dasgupta is currently posted as the Chief of Staff of the Eastern Naval Command based at Vishakapatnam.

“Every country needs to operate within the ambit of internationally recognised and accepted laws, conventions and treaties. When nations do not do that, then it may lead to situations whose outcomes are difficult to predict,” Admiral Dasgupta tells Senior Rediff.com Contributor Air Commodore Nitin Sathe (retd) in the first of an exclusive two-part interview.

Congratulations on taking over as Chief of Staff of the Eastern Naval Command.
You have assumed the responsibility when a lot is happening in the Ladakh sector.
We will start by first understanding the basic role of the Eastern Fleet in the Arabian Sea.

Thank you, both for your kind congratulations as also providing me this platform to share some thoughts with you and your readers about the Indian Navy.

As you are aware, India is blessed with a peninsular geography and to cater for operational requirements on both seaboards. The Indian Navy has an operational command under a Commander-in-Chief on both the East and West Coasts.

We also have a Commander-in-Chief at Kochi, heading the Southern Naval Command, which is a dedicated Training Command.

The Fleets comprise the main combat platforms, ships that will be tasked to execute operations at sea across the spectrum of conflict.

China has deep rooted interests in the Indian Ocean Region (IOR).
Could you spell out the same for our readers please?
Also, I would like you to highlight the importance of the Andaman and Nicobar Islands from the security perspective.

The Indian Ocean is unique.

As the great maritime scholar K M Panikkar rightly highlighted, unlike the other two main oceans, Atlantic and Pacific, which are bound on two sides by land mass, the Indian Ocean has land mass on three sides.

And the Indian peninsula juts out into the ocean for a thousand miles.

It is home to the main energy and economic highways of the global economy.

India sits astride these highways.

Most global economic powers, China included, have their national destinies intertwined with unfettered flow of their commerce through this region and, therefore, have interests in the region.

China has also made substantial economic and possibly, dual use investments in Africa and other IOR littoral States.

Their substantial investments at Djibouti, Gwadar and Hambantota are well-known.

They are also weapon and military hardware suppliers to several small IOR nations.

As you have noted, the Andaman and Nicobar Islands have unique geographical location.

They sit astride the crucial waterways of the Malacca Strait, through which most of the world’s energy and commerce flow.

Therefore, these islands have strategic and security significance not only for India, but the nations whose trade flows through the region.

The strategic importance of these islands for India can be lost on only the most ‘sea-blind people’.

Nations, big and small, look after their national interests.

They take measures and act in ways that they feel are warranted to safeguard the same.

However, every country needs to operate within the ambit of internationally recognised and accepted laws, conventions and treaties.

When nations do not do that, then it may lead to situations whose outcomes are difficult to predict.

One of the mandates of the Indian Navy is to protect India’s trade and economic interests.

Towards this, the Indian Navy’s doctrine and force planning are fully aligned.

The Indian Navy undertakes operations and deployments, as required, across areas of interest to India to uphold this mandate. 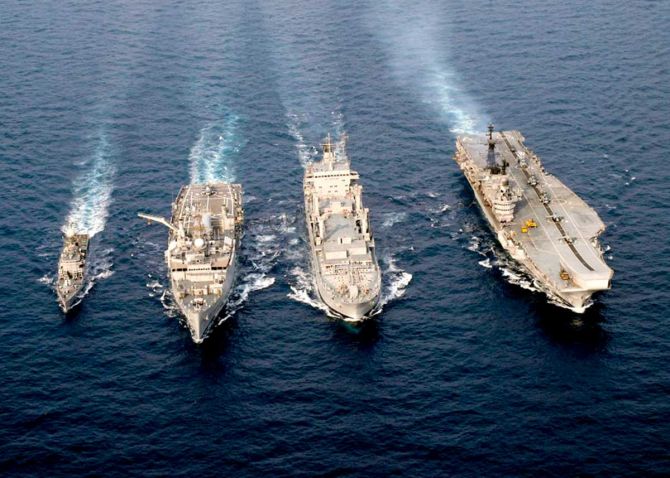 What about about the collaboration between the Indian Navy and the Japanese, Australian and other navies to thwart the Chinese threat?
Will it be a joint force and how effective will it be?
How have we been training for the same to achieve our objectives?

India and the Indian Navy have always operated with like-minded navies, in the region and beyond, for many decades.

What we see now is just a continuation of this policy.

Further, India has not been part of any military alliance so far.

We have either operated, independently or under the UN flag.

Even as we speak, the Indian Navy continues to deploy ships in the Gulf of Aden to ensure safety of merchant marine transiting through piracy-affected areas in that geographical region, independently, rather than as part of any alliance.

The Indian Navy, however, as I have mentioned, regularly operates with other like-minded navies to enhance understanding of best operating practices and enhance inter-operability.

The Eastern Naval Command regularly undertakes exercises with more than 11 navies in the region and beyond towards the same.

Since the future cannot be predicted with accuracy, we feel that operating with friendly navies routinely will give us the confidence and inter-operability necessary to address common challenges.

The interaction with the USA, Japan and Australia may be viewed in this light.

The Chinese have a strong navy in terms of numbers.
What is your assessment of the PLA navy’s strengths and weaknesses?
With its naval force looking after different interests, how does our naval strength compare to what China can deploy against us in our area of interest?

All nations, China included, undertake force accretions based on their national interests and strategy.

Operating large navies comes with its own set of challenges.

Naval platforms are extremely complex due to the medium they operate in as also the systems and sub-systems onboard.

When nations have adequate industrial base and economic heft, they can undertake accelerated force accretions, as have been seen over the decades.

World War II is a perfect example for understanding how national will and industrial capacities ensure naval force build-up.

However, whilst constructing and commissioning ships is one aspect of naval operations, the devil is in the details.

In my view, it is all about the personnel onboard.

For a nation to ensure bang for the buck, the personnel manning cutting edge platforms must have the necessary skill sets to exploit the sensors and weapons onboard.

It takes years and years of practice.

So, finally it is the man behind the machine.

The Indian Navy’s force structure and basing hinges on a continuous assessment of the envisaged challenges to India’s National Interests.

We position and deploy accordingly.

You are right that the Chinese navy is large and expanding both in numbers and capability by the day.

India too must take measures to safeguard its own interests, now and in the future.

More importantly, we need to shape an international environment that supports our national interests in the maritime theatre. 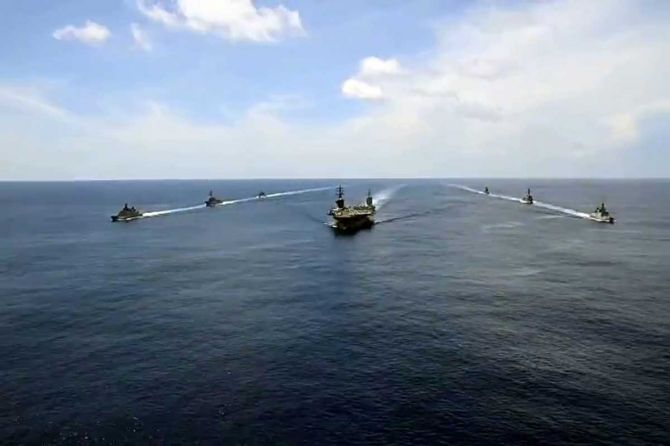 A lot has been said about acquiring a third aircraft carrier for the navy.
With your experience of working on an aircraft carrier, what are your views on the same?
How will it bolster our strength/capabilities in the times ahead?

The Indian Navy feels that India should have three aircraft carriers to serve its maritime interests.

It is particularly important to understand that acquiring the professional competence to operate aircraft carriers effectively and safely takes several years.

And we, as a nation and navy, have had more than five decades of such experience.

We need to retain and further perfect this potent capability.

Aircraft carriers provide operational flexibility and manoeuvrability that is unmatched.

Therefore, frivolous debates about our aircraft carrier projects should not be encouraged.

There are vested interests that do not want us to have such a capability. 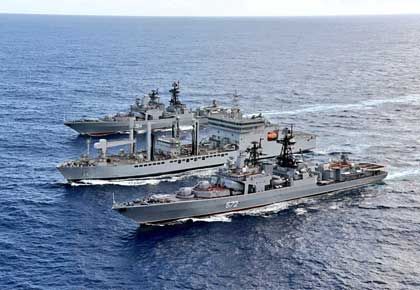