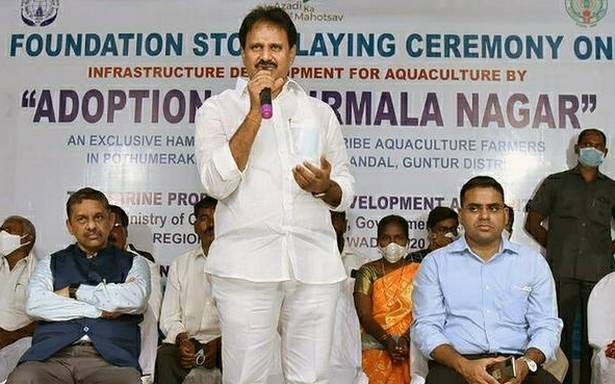 MPEDA and district administration contribute to the project

Minister for Fisheries Mopidevi Venkata Ramana has said that aquaculture would get a boost with creation of better facilities and marketing of aqua products.

The Minister was speaking after laying foundation stone for an integrated aqua hub at Nirmala Nagar in Repalle to be created by the MPEDA at a cost of ₹2.09 crore.

Mr. Venkata Ramana said that A.P. led in the export of aqua products and fetched an annual revenue of ₹20,000 crore of the country’s export revenue of ₹40,000 crore. The hub would have facilities including bio testing, power and water quality testing.

MPEDA Chairman A. Srinivas said aquaculture would be given all support and there was a need to increase production from the existing 1.50 lakh acres to 2.50 lakh acres. MPEDA had contributed 75% of the project cost while the district administration contributed 25%. Collector Vivek Yadav said the district had a coastline of 41 km and there was ample scope for the development of aqua sector.