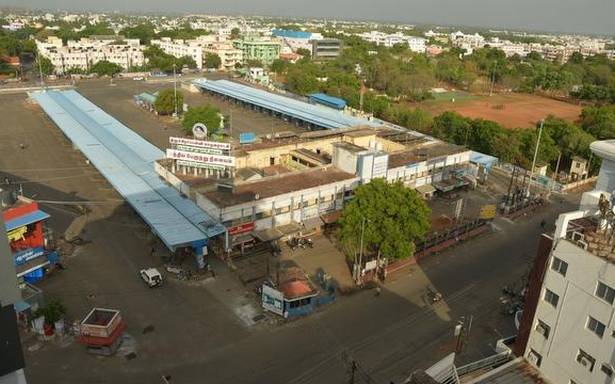 Tiruchi Corporation has sent a proposal to the Commissionerate of Municipal Administration (CMA) seeking appointment of a consultant to study the feasibility for establishing an integrated bus stand at Panchapur on Tiruchi-Madurai Highway.

The move comes after Minister for Municipal Administration K.N. Nehru visited the place and held detailed discussion with Collector S. Sivarasu and Corporation Commissioner S. Sivasubramanian a few days ago. During the discussion, Mr. Nehru told the officials to allot at least 100 acres out of 560 acres of land owned by Tiruchi Corporation at Panchapur for establishing the bus stand.

The proposal for an integrated bus stand has been hanging fire for over two decades due to a stalemate over identifying a suitable site. The existing central bus stand has become congested and struggles to handle the increasing traffic of buses and passengers.

Mr. Nehru felt that Panchapur was ideally suited to set up the integrated bus stand as it was not only located on Tiruchi-Madurai Highway but also had good connectivity to five highways so as to operate buses to various destinations in the State.

Mr. Sivasubramanian told The Hindu that a consultant would be appointed to study the feasibility of establishing the bus stand. The consultant would be asked to analyse various aspects including soil condition, drinking water availability, adaptability and opportunities for future expansion. After clearance from CMA, a tender would be floated for appointing the consultant.

The civic body chief said the consultant would also be given the responsibility of preparing a Detailed Project Report. A clear picture would emerge shortly.

A vast tract of land was under use for discharging and processing the sewage collected from different parts of the city for more than 20 years. The STP was established in 1995 as part of phase-I underground drainage project.

The Corporation had started works to revamp the STP to bring the unused land for processing the sewage collected under phase-II underground drainage project, which was under progress in different parts of the city.

Sources added that there was scope for remodeling or reinstalling the STP to a remote location so as to provide land for the bus stand project.