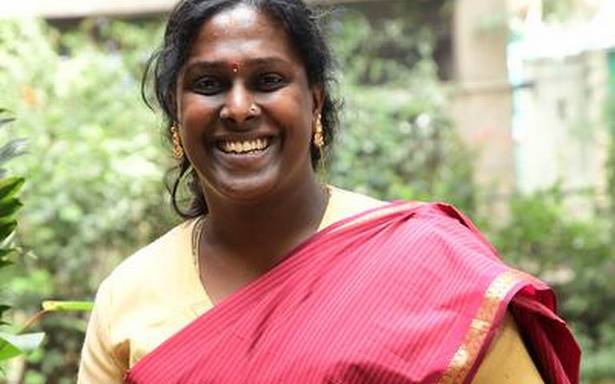 Transgender activist Akkai Padmashali talks to The Hindu about her autobiography, the way forward for the community and the need for political activism.

Transgender activist Akkai Padmashali published her autobiography Akkai in Kannada last week. In her straight-forward account, she gives a rights-oriented perspective on the transgender struggle for equality and inclusivity, but at the same time rejects sympathy. She is also critical of certain aspects of the ‘Hijra’ tradition. An English translation, A Challenge to Sympathy, will be published by Zubaan Books in November later this year. In an interview with The Hindu, Akkai talks about why she set out to write her autobiography, the way forward for the community and the need for political activism. Edited excerpts:

Why write your autobiography now?

Many have asked this question. Why should one write their autobiography only when they are old? Most of the transgender autobiographies from the country seem to be aimed at evoking sympathy from society, which I am not comfortable with. My memoir in English is called A Challenge to Sympathy. I think there is a new rights based discourse that has to take shape regarding transgender issues in this country and this memoir is a small step in that direction.

Do you see joining mainstream politics also in this light?

There is a need to make our struggle political. Years after the Supreme Court read down Section 377 of the IPC, nothing much has changed for the community. There are serious lacunae in the recent law enacted by the Parliament to protect our rights. We need to speak in the language of constitutional rights and occupy spaces as citizens of this Republic and not out of any sympathy by others.

Very few countries in the world are today speaking in terms of rights of sexual minorities and India has a lot of catching up to do. I found the Indian National Congress to be the right platform for this struggle, so I joined the party.

You narrate at length your experience of working with NGOs and all of it is not pleasant. How do you see NGO work impacting social struggles, including the fight for transgender and sex worker rights?

The problem with ‘NGOisation’ is the concentration of power in certain hands based on the ability to raise funds, especially with people not belonging to the community. For instance, take transgender or sex worker communities. In the beginning, we did not have the exposure or the power to even create an NGO and people not belonging to the community initiated it, which we definitely appreciate. But they have to work on the principle of trusteeship and empower people from the community to take charge. Attempts by those not from the community — though they may be well-wishers — to have a stranglehold over the community through money flow patterns is indefensible. They should learn to let go.

You offer a very nuanced take on the Hijra tradition, which is also critical of certain aspects. How difficult was it to articulate this criticism? Is the community open to change?

I belong to the Hijra tradition. Not many know of our tradition. For instance, the community is only built on the basis of femininity, irrespective of caste, creed or religion. We are one of the best living examples of secularism in everyday practice. But being part of the community, I have also observed and rebelled against certain customs which I feel are discriminatory, patriarchal and superstitious.

Some of these superstitions and patriarchy within the Hijra community are imposed by society outside. For instance, we are called ‘Mangalamukhis’. The idea of ‘Mangala’ and ‘Amangala’ itself is a Brahminical idea we need to resist. There will always be resistance and it has been an arduous journey. Change is usually slow and gradual, but definitely there have been steps in that direction.

You argue for legalising sex work…

I am definitely against trafficking, but if an individual opts for it, there must be a legal opportunity to do the same. The profession is not going to go away. As someone who was in sex work earlier in life, I think once it is legalised, we can force the government to protect their rights and ensure their welfare.

Your’s was the first transgender marriage to be legally registered in the State. Sadly, we learn that it is headed for divorce.

I always dreamt of marriage, but going through it, I only realised how patriarchal an institution marriage is. I can’t stay where I am not respected and where my rights are denied, so I walked out of it.