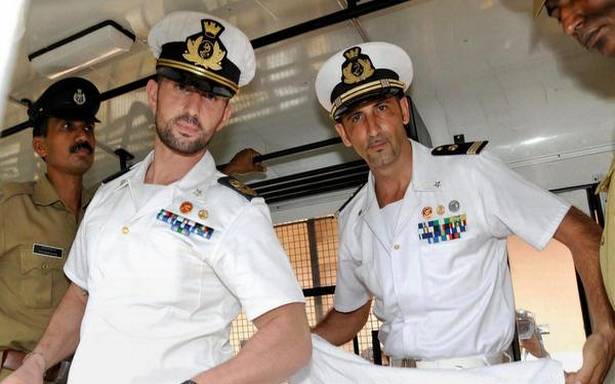 The Supreme Court on Wednesday agreed to hear on April 9 the Centre’s plea seeking closure of cases against two Italian marines accused of killing two Indian fishermen off the Kerala coast in February 2012.

The Centre told the top court that it has contacted the victims’ family members and due compensation has been paid to them.

A bench of Chief Justice SA Bobde and Justices AS Bopanna and V Ramasubramanian was informed by Solicitor General Tushar Mehta, who mentioned the matter for urgent listing, that on last occasion the court had asked the Centre to contact the victim’s family.

“They were contacted. They have been paid the due compensation. They are here also,” Mehta said.

The bench then said that it will take up the matter for further hearing in next week.

Mehta requested the bench to take up the matter for hearing on Friday saying “there is some urgency since it is between the Indian and Italian government”.

The bench then said “ok” and agreed to hear the plea on Friday.

On August 7 last year, the top court had made it clear to the Centre that it would not pass any order on the plea seeking closure of cases against two Italian marines, accused of killing two Indian fishermen, without hearing the victims’ families, who should be given adequate compensation.

It had asked the Centre to make the victims’ family members as parties to its plea seeking closure of Italian Marines case.

The Centre had told the top court that Italy has assured the Indian government that it would prosecute the Marines there as per law and that maximum compensation will be ensured to the victims’ family members.

The apex court had said it appreciates the steps taken by Italy to prosecute these marines but the court was concerned with the adequate compensation to victims’ kin.

While referring to the case against the marines pending before the special court, the top court had said that without applying for withdrawal of prosecution of case how the Centre can approach it and seek closure of the matter.

The Centre had referred to the last year’s ruling of the Permanent Court of Arbitration (PCA) at Hague which held that India was entitled to get compensation in the case but can’t prosecute the marines due to official immunity enjoyed by them.

On July 3 last year, the Centre had moved the top court seeking closure of judicial proceedings here against the Italian marines.

In February 2012, India had accused two Italian marines, Salvatore Girone and Massimiliano Latorre, on board the MV Enrica Lexie — an Italian flagged oil tanker — of killing two Indian fishermen who were on a fishing vessel in India’s Exclusive Economic Zone (EEZ).

The Centre had said the arbitration under United Nation Convention on the Law of Sea (UNCLOS), which was instituted on a request from Italy, has delivered its Award on May 21, 2020.

It said the Tribunal upheld the conduct of Indian authorities with respect to the incident and highlighted the material and moral harm suffered by the Indian fishermen on board the St. Antony on February 15, 2012.

“It held that the actions of the Italian Marines breached India’s freedom and right of navigation under UNCLOS Article 87(1)(a) and 90,” the application had said, adding, that the Tribunal had observed that, in principle, India and Italy had concurrent jurisdiction over the incident and a valid legal basis to institute criminal proceedings against the Marines.

It said the Tribunal took note of the commitment expressed by Italy to resume its criminal investigation into the events of February 15, 2012 and decided that India must take necessary steps to cease to exercise its criminal jurisdiction over the marines.

Latorre, who had suffered a brain stroke on August 31, 2014, was first granted bail and allowed by the apex court on September 12, 2014 to go to Italy for four months and after that, extensions for his stay have been granted to him.

In Italy, Latorre had to undergo a heart surgery after which the top court had granted him extension of his stay in his native country.

On September 28, 2016, the apex court had allowed Latorre to remain in his country till the international arbitral tribunal decided the jurisdictional issue.

On May 26, 2016, Girone was also granted bail with conditions and allowed by the top court to go to his country till the jurisdictional issue was decided.

The complaint against the marines was lodged by Freddy, the owner of fishing boat ‘St Antony’ in which two Kerala fishermen were killed when marines opened fire on them allegedly under misconception that they were pirates.