Tavleen Singh writes: Every time sedition charges are recklessly made against a student, an activist or a journalist, it diminishes our democracy a little bit more. Dissent is the lifeblood of democracy. Without it, democracy dies. 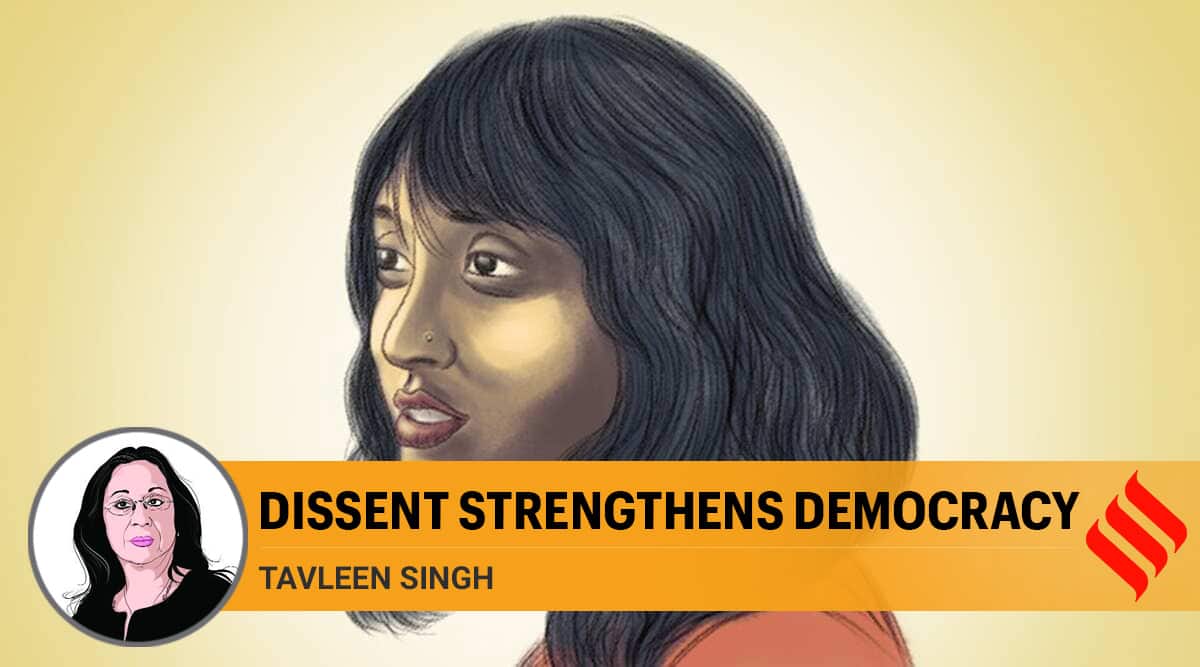 ‘The offence of sedition cannot be invoked to minister to the wounded vanity of governments.’ The reason why I begin this piece with someone else’s words is because no poet could have said more eloquently what Justice Dharmender Rana said when he gave Disha Ravi bail last week. It was not just the eloquence of the judge’s words that dazzled me, it was his courage. In a time when poets, journalists, comedians and filmmakers are being charged with sedition, it takes courage for anyone to speak up.

We live under the most powerful government we have seen in decades with almost no check on its power. The Opposition is confused and ineffectual. The judiciary worryingly docile. And, the media has been whipped into obedience by punishing and jailing journalists who dare to speak. In Uttar Pradesh a small-time reporter was charged with ‘cheating and criminal conspiracy’ because he did a story revealing corruption in the mid-day meal scheme in a rural school in Mirzapur.

A journalist from Kerala who tried to go to Hathras, to report on the gangrape and murder of a Dalit teenager, has been in jail for months under a preventive detention law. He is charged with ‘raising funds for a terrorist act’. Siddique Kappan happened to travel to Hathras just after the victim was cremated by police in the dead of night and when Yogi’s officials were desperately trying to make the story disappear through denial, deceit and brute force. When the story refused to die, an ‘international conspiracy’ was discovered in which Kappan was implicated along with a jihadist outfit in Kerala.

Something similar happened with Disha Ravi. It is hard to believe that climate activists and a ‘toolkit’ could be a threat to India, but there is no question that the Prime Minister of India believes this bizarre conspiracy theory. He said as much in a speech to tea estate workers in Assam. He told them that there were international forces that were working to ‘defame’ yoga and Indian tea. I will not allow anyone to threaten the jobs of my tea estate workers, he thundered. It now turns out that the toolkit that landed Disha in jail did not say yoga and Indian tea should be defamed, but said that this image of India was misleading. Disha appears to have chatted online with a Canadian Khalistani group called Poetic Justice Foundation and this chat is what invoked the sedition charge.

Justice Rana said when releasing her on bail, that he saw nothing in the toolkit that indicated that she was asking for a violent uprising against the Indian State. But the Delhi Police arrested her in the manner they would arrest a terrorist. They did this, they said, because the toolkit was the manual used by those who created chaos in Delhi on Republic Day. “It was copycat,” said Delhi’s Police Commissioner. We should ask how miscreants were able to enter the high-security Red Fort at all, but this is a question we do not dare ask for fear of retribution by a government that sees an ‘international conspiracy’ around every corner.

Current paranoia about international conspiracies is reminiscent of the days when Indira Gandhi saw the ‘foreign hand’ everywhere. After she was assassinated, a KGB spymaster called Vasili Mitrokhin defected to the West and wrote a memoir in which he revealed that the only ‘foreign hand’ responsible for causing mischief in her time was a Soviet one. Mitrokhin wrote in his memoir that the Soviet Union had many of Mrs Gandhi’s ministers on its payroll as well as some celebrated leftist editors. That ‘foreign hand’ died when the Cold War ended. The times have now changed, and the leaders of most western countries openly admit that they want democratic India to succeed so that it can act as a buffer against totalitarian China.

India can be that buffer as long as she preserves the one advantage that we have over China: democracy. Every time sedition charges are recklessly made against a student, an activist or a journalist, it diminishes our democracy a little bit more. Dissent is the lifeblood of democracy. Without it, democracy dies. This is why it is so important that we keep reminding those who sit in high office today that dissent is not sedition.

As someone who believes that our sedition law is a colonial legacy that should have been torn up and thrown away immediately after the British left, I have been very disturbed to see how it has been used selectively in recent days. On the day that Disha was released last week I came upon an interview with the BJP leader, Kapil Mishra, by two brave journalists from

The Wire. They got him to admit on camera that he had publicly said that students of JNU, Jamia and AMU should be shot as traitors. How has he escaped a sedition charge? How is it that other BJP leaders who have openly called for violence manage to escape sedition charges?

Sedition has so clearly become a weapon to crush dissent that it is a good time to seriously consider ridding India of this law that was once used to jail the leaders of our freedom movement. I shall end by repeating that Justice Rana has shown real courage in a perilous time. What he said will serve to strengthen our most powerful weapon: democracy.

This article first appeared in the print edition on February 28, 2021 under the title ‘Dissent strengthens democracy’.