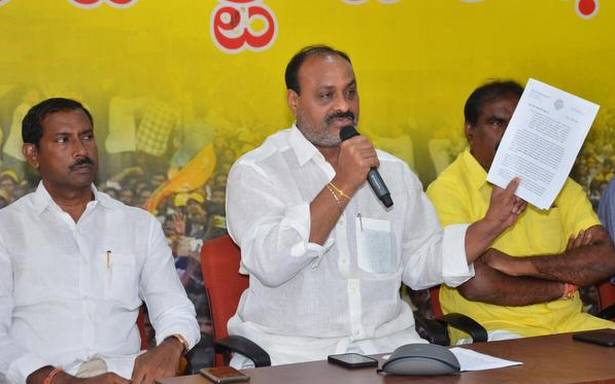 TDP State president K. Atchannaidu alleged that there is nothing for the Jagan Mohan Reddy government to boast of in its two-year rule, except the welfare schemes of the Chandrababu Naidu government, which have been given new names.

Addressing a media conference on Sunday, Mr. Atchannaidu recalled that the YSR Congress Government began its rule with destruction of the ‘Praja Vedika’ built by the previous government, in the name of unearthing irregularities in its construction.

Subsequently, a number of buildings of Opposition leaders, who did not join the YSR Congress Party (YSRCP) were demolished but the illegal constructions of the ruling party leaders were not touched.

He wondered what had happened to the three-capital ‘decentralisation’ plan of the YSR Congress government and claimed that the State govt. could have accumulated a revenue of ₹2 lakh crore if Amaravati had been completed.

Mr. Atchannaidu said that while the Telugu Desam government had obtained the approval of the Centre for the sanction of ₹52,000 crore for the Polavaram project, the YSR Congress government had reduced the project cost to ₹22,000 crore.

The changes in the sand policy, brought out by the Jagan Mohan Reddy government, had led to sand scarcity and construction workers losing their jobs. The cost of a tractor load of sand, which was ₹1,500 during the previous government, has now increased to ₹6,000.

He alleged that instead of implementing total prohibition, as announced in its election manifesto, the Jagan Mohan Reddy government hiked the prices of liquor and introduced new brands.

Mr. Jagan Mohan Reddy, who criticised Mr. Chandrababu Naidu day in and day out over his failure to achieve Special Category Status (SCS) to the State govt., had failed to take it up with the Centre in the last two years.

Mr. Atchannaidu alleged that in two years, not even a single industry has been established in the State and even the existing industries are in bad shape.

The Telugu Desam government had brought KIA Motors and a cellphone company to the State.

He also alleged that the YSR Congress government is favouring privatisation of Visakhapatnam Steel Plant (VSP) as it is keen on acquiring the vacant land belonging to the VSP.