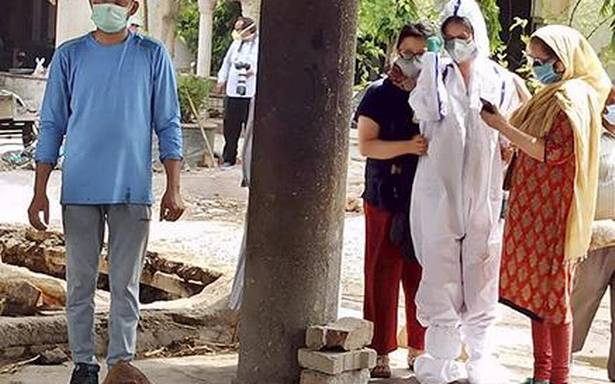 They speak of common worries about contracting the virus, treatment and uncertainty over release

A day after Pinjra Tod activist Natasha Narwal was granted bail to attend her father Mahavir Narwal’s funeral, United Against Hate co-founder Khalid Saifi’s wife, Nargis, said her husband lodged in jail is scared if he would be able to meet his mother.

‘Prisoners in a pandemic’

“I told Khalid about Natasha’s father over the phone, and he got scared. He is scared if he would be able to meet his 80-year-old mother. Our daughter asked him when he will return home. He told her that he doesn’t know if he will return at all,” she said at the conference.

She said a few days ago, Khalid complained of fever, but his COVID-19 test wasn’t conducted despite requests following which, she approached a court. A test was then ordered.

“Thankfully, he tested negative, but he was unwell for 15 days. I know how tough that period was for us because there was no one to take care of him. There are no provisions for hot water and steam,” Ms. Nargis said.

Sharing another incident, she said a person in the barrack where Mr. Khalid is lodged had tested positive. She said neither other persons in the barrack were tested nor was the place sanitised, she said.

“The law, which keeps under-trial prisoners of UAPA in jail and doesn’t allow them bail, needs to change,” he said.

Ms. Raihanath also claimed that her husband was denied treatment and was only shifted following a court order. She said she couldn’t meet him despite the court giving her permission to do so.

Remembering late Narwal, activist Mander, said: “He was proud of his daughter, but he also said he hoped the jailed time is not long enough that he is unable to see her. Unfortunately, that is what happened,” he said.