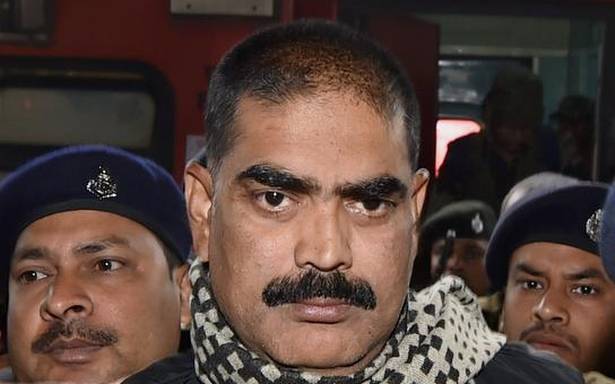 Former Rashtriya Janata Dal MP Mohammad Shahabuddin, who was lodged in Tihar jail, died of COVID-19 at a city hospital on Saturday.

Prison officials said gangster-turned-politician Shahabuddin, who was serving serving life imprisonment in Tihar, tested positive on April 20 and was admitted to Deen Dayal Upadhyay Hospital, where he died during treatment.

When his condition deteriorated two days ago, he was put on ventilator at the hospital.

Mr. Goel told news agency PTI  “information has been received from Deen Dayal Upadhyaya hospital in Delhi about the death of Mohd Shahabuddin. He was suffering from COVID-19 and was admitted in DDU on April 20”.

Accused in over three dozen cases, the four-time RJD MP from Siwan was a name that spelt terror in the district for a long time. He was infamously known as “Sultan of Siwan” and “Saheb” among local people. He had got bail in several cases.

In 2016, he came out of Bhagalpur jail after serving 11 years of incarceration in a double murder case of two young sons of a local businessman Chandehshwar Prasad.

“Freedom of Mohd Shahabuddin is our death sentence”, Mr. Prasad had then told The Hindu after his bail from the jail.

However, Shahabuddin was again sent to jail, and later on a Supreme Court order, shifted to Delhi’s Tihar jail in February 2018.

He was also accused in the murder case of a local scribe.

After coming out of Bhagalpur jail in 2016, Shahabuddin made a controversial remark that Chief Minister Nitish Kumar was a “Chief Minister of circumstances”.

In his absence, his wife Hina Sahab contested parliamentary polls from Siwan but was defeated by BJP candidate Kavita Singh.

Shahabuddin has two daughters and one son.

In September 2020, his father Sheikh Mohammed Hasibullah, 90, died in Pratapur village of Siwan. Shahabuddin was reportedly denied parole to attend the last rites of his father.

(With inputs from Hemani Bhandari in New Delhi)