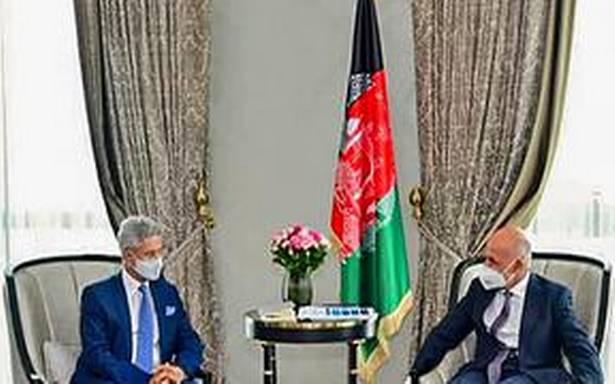 Worries over growing violence and Taliban gains in Afghanistan overshadowed External Affairs Minister S. Jaishankar’s meetings ahead of a connectivity conference here on Thursday, as he called on Afghanistan President Ashraf Ghani and met the U.S. Deputy National Security Adviser and Special Envoy, as well as other Foreign Ministers.

“Discussed the situation in and around Afghanistan. Reiterated our support for peace, stability and development of Afghanistan,” Mr. Jaishankar tweeted after the meeting, which focused on the rapid developments and advances by the militia within days of the U.S. and NATO troops pullout from Bagram airbase this month.

Also read | Future of Afghanistan cannot be its past: Jaishankar

According to sources, the Ghani government is conducting a review of the Afghanistan National Defence and Security Forces (ANDSF) military strategy which could see it shift tactics in dealing with the Taliban, that have claimed several key towns and border check post areas in the last week. This was the first high-level meeting between Delhi and Kabul since the government decided to pull out all Indian personnel from the Consulate in Kandahar. Internal assessments have suggested that while the Taliban has not been successful in moving in to many more populated cities, it will seek to control Kandahar, which was its traditional base. Officials said President Ghani was ‘determined’ to take back some of the strategic areas taken over by the Taliban.

Mr. Jaishankar also met U.S. Deputy National Security Adviser Elizabeth Sherwood-Randall and U.S. Special Representative on Afghanistan Zalmay Khalilzad, who are attending the conference, and are understood to be discussing the possibility of an American military base in one of the Central Asian countries, including in Uzbekistan, where the U.S. had shut down its Karshi-Khanabad base in 2009.

Mr. Jaishankar said he had “exchanged views on the evolving situation in Afghanistan”. India has been wary about the U.S. decision earlier this year to pull out its troops entirely from Afghanistan, without waiting for either a ceasefire or for a political agreement between the Afghan government’s representatives and the Taliban at Doha. He also discussed the situation with Kazakhstan Deputy PM and Foreign Minister Mukhtar Tileuberdi and regional connectivity with Bangladesh Foreign Minister Abdul Momen, the EAM wrote in separate tweets.

During the call on Mr. Ghani, Afghan officials are understood to have also briefed Mr. Jaishankar on the parallel effort aimed at reviving the intra-Afghan talks with the Taliban, with a delegation headed by Dr. Abdullah Abdullah travelling to Doha next week and also a conference in Islamabad from July 17-19 where several Afghan leaders including former President Hamid Karzai and Afghan special envoy for Pakistan Mohammed Daudzai are expected to attend.

Indian officials said no meeting is scheduled or expected with Pakistan’s Prime Minister Imran Khan, or Pakistani Foreign Minister Shah Mehmood Qureshi, however, who are also in Tashkent on an official bilateral visit to sign a transit trade agreement with President Shovkat Mirziyoyev, which would give Uzbekistan traders access to Karachi and Gwadar ports. Mr. Khan will address the inaugural session of the conference “Central and South Asia 2021” along with Mr. Ghani on Friday.

Addressing a business conference in Tashkent, Mr. Khan pitched for more unified region, on the lines of the European Union, where he said the “standard of living” had improved due to intra-regional trade.

However, Mr. Qureshi struck a sharper note here, when asked about prospects for a meeting, saying the road to India-Pakistan talks “passes from Srinagar”, dismissing any dialogue until India changes its ‘attitude’ on the Jammu Kashmir issue, according to a statement issued by the Pakistani Foreign Ministry.