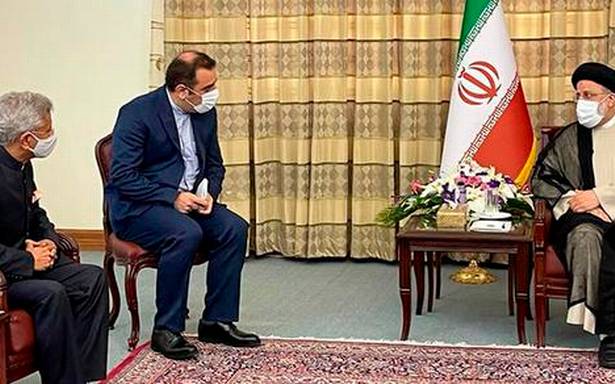 Minister hands over a personal message to Ebrahim Raisi from Modi

In a rare diplomatic gesture, External Affairs Minister S. Jaishankar travelled to Tehran on Thursday, and called on Iranian President-elect Ebrahim Raisi, a month before he assumes office.

Mr. Jaishankar, who made a transit halt in Tehran on his way to Moscow for bilateral consultations, handed over a personal message to the President-elect from Prime Minister Narendra Modi, and also met with Iranian Foreign Minister Javad Zarif.

“Appreciate [Mr. Raisi’s] warm sentiments for India. Deeply value his strong commitment to strengthen our bilateral ties and expand cooperation on regional and global issues,” Mr. Jaishankar tweeted after his meeting, which was the first such call on Mr. Raisi by a foreign dignitary since he won the presidential election on June 19, Indian officials said. Mr. Raisi, presently the country’s Chief Justice, will be sworn in as Iran’s eighth President on August 5.

“I am sure this visit will be the basic basis for Iran-India relations during the Presidency of Ayatollah Raisi,” said Rasoul Mousavi, a senior diplomat in the Iranian Ministry of Foreign Affairs, describing Mr. Jaishankar’s meetings.

Mr. Jaishankar’s visit comes at a time of deepening concern over the security situation in Afghanistan in the wake of the pullout of U.S. troops, as the Taliban make rapid advances over various districts around the country. Significantly, Mr. Jaishankar’s visit to Tehran coincided with the visits of a senior Taliban delegation led by Taliban political bureau head Sher Mohammad Abbas Stanekzai and Afghanistan’s former Vice-President Yunus Qanooni, where the Iranian government is hosting, for the first intra-Afghan dialogue between them.

Last week, the Ministry of External Affairs had denied reports that Mr. Jaishankar had met with Taliban leaders in Doha when he stopped over there twice, but maintains that India is in “touch with various stakeholders” when asked about contacts at other levels between the government and Taliban leaders.

Mr. Jaishankar is also expected to discuss the situation in Afghanistan with Russian Foreign Minister Sergey Lavrov during talks on Thursday in Moscow. During the visit to Russia July 7-9, the Minister is expected to discuss preparations for the planned visit by President Vladimir Putin to Delhi for the India-Russia annual summit, the upcoming BRICS summit to be hosted by India, as well as expected deliveries of the S-400 Triumf missile systems later this year. He will also deliver a speech on “India-Russia ties in a Changing World” at the Primakov Institute of World Economy and International Relations.