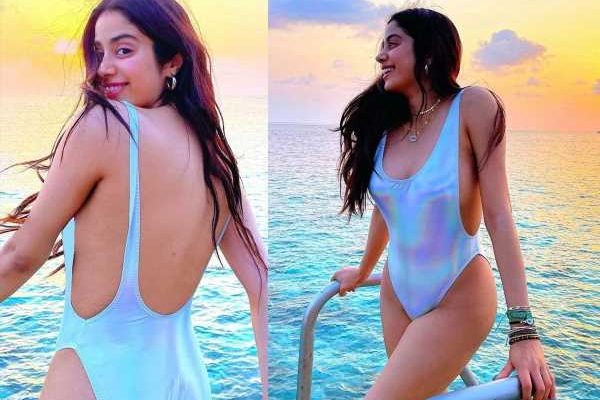 Janhvi Kapoor, the daughter of late actress Sridevi and Vakeel Sab’ producer Boney Kapoor, knows just how to wow her Instafan. Currently the Dhadak actress is in Maldives and enjoying the holidays. The Roohi actress is the latest addition to the list of the celebrities who have the Maldives stamp on their passports already.

Yesterday evening, Janhvi Kapoor took to her microblogging page and shared a glimpse of her vacation, which of course includes swimming in the blue Maldivian sea.  Coming on the pic, Janhvi Kapoor was looking h*t in  silver color Swimsuit. A few other photographs capture  Janhvi Kapoor’ beauty, alongside the awe inspiring nature around her, the serene blue water and the sunset sky.

She was recently in New York, where her sister Khushi Kapoor is studying film.  On the work front, she was last seen playing the female lead  in horror comedy Roohi, starring Rajkummar Rao and Varun Sharma. The horror-comedy  Roohi also became the first film to hit theatres after the government allowed cinema halls/ theaters nationwide to operate at full capacity from 1st February.

She made her debut in Bollywood with Dhadak, opposite Ishaan Khatter, which was released in 2018. She was also the part of Netflix’s Ghost Stories.  She will be next seen in Good Luck Jerry and  comedy  movie Dostana 2, co-starring Kartik Aaryan.