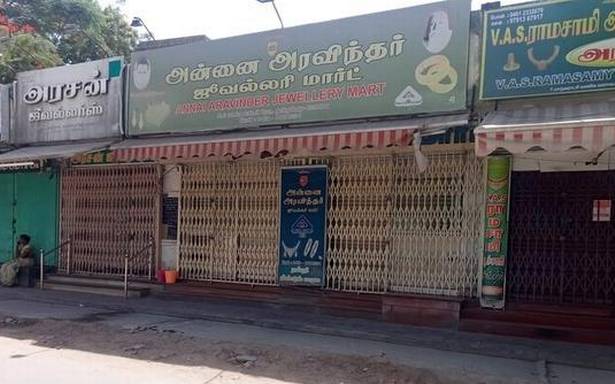 Opposing the hallmarking of gold as mandatory by the Union government, around 300 jewellery shops had downed their shutters for about two hours on Monday.

From 9 a.m. to 11.30 a.m., the bullion merchants staged a demonstration in front of their shops. Holding placards, they urged the Bureau of Indian Standards to drop the scheme as it was not only time consuming, but also affected the livelihood of small and tiny merchants and goldsmiths in the sector.

The hallmarking was welcome, but getting the six digit unique identity stamped on the gold would not be possible, said Sridhar, secretary of the Thoothukudi Bullion Merchants Association and hoped the Union government would favourably consider their demand in larger public interest.

As a part of the nation-wide strike, the jewellers had downed their shutters to draw the attention of the government in this regard. At a time, when the covid-19 pandemic had forced many sectors into a lockdown, such forceful introduction of laws during the mid-way of the pandemic made the survival of many small and tiny merchants more tough and complicated, the members claimed.

Similar agitations were held in Tirunelveli, Kanniyakumari, Tenkasi among other districts, the office-bearers and other members had joined the strike.