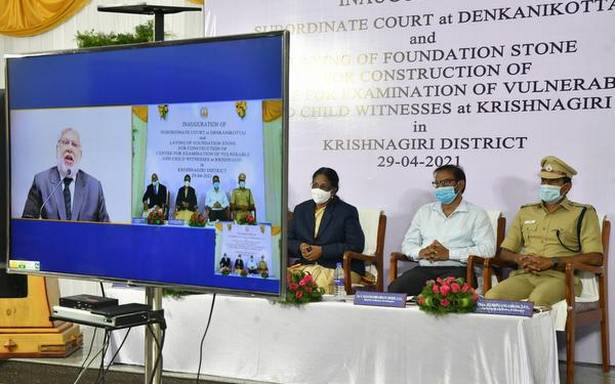 We need to introspect to see to what extent we are accountable, says Sanjib Baneerjee

Justicing in a Constitutional Republic was wedded to the rule of law, where personal opinions of judges matter little. But, what matter are the reasons given in support of the findings to make it acceptable to society at large, said Chief Justice of Madras High Court Sanjib Banerjee, while laying the foundation for the construction of a Centre for Examination of the Vulnerable and Child Witnesses here. He was presiding over the event via video conference late Thursday evening.

Reasons link the facts against the backdrop of the law to the conclusions and not the personal opinion of judges. “Rather than the coercive authority that the law gives us as a sovereign, if we use persuasive authority of reason, then acceptability of the judgment is greater in society,” Justice Banerjee said.

On judicial accountability, Justice Banerjee said, respectability of the judiciary came from accountability. “There are very little checks and balances over us though. We need to introspect to see to what extent we are accountable. As being part of society, we reflect both the good and bad of society. There are rotten apples amongst us. As long as we are accountable, and we expose these rotten apples, we will have the respectability we deserve”.

Calling upon the subordinate judiciary to be imaginative to manoeuvre justice in favour of the stakeholders who are the litigants, Justice Banerjee invoked the Bhopal Gas tragedy damages case, and Ratlam Municipality case to illustrate his point.

He said the judicial officers of the district courts believed they could not do the kind of justice as the High Court, since they did not have powers under Article 226. “There are provisions of Criminal Procedure Code (CrPC), and I direct them to Ratlam Municipality judgment of the Supreme Court. A judicial magistrate through effort and enterprise could rid the town of its menace of garbage through the provisions of the Cr.PC”.

Similarly, the principal district judge (PDJ) of Bhopal turned jurisprudence on its head in the claims pertaining to damages in the wake of the tragedy, the Chief Justice said.

“In claims pertaining to damages, the breach is to be established for entitlement claims and assessment of quantum. But the PDJ in Bhopal, realising the large scale disaster, ruled that the breach was already established by the circumstances and facts as they present themselves and went straight into an interim award of damages,” he said. That provided immediate solace and medical help for public who could not afford the resources. The PDJ’s portrait still adorns the entrance of the National Judicial Academy in Bhopal for the imaginative use of his jurisdiction to ensure immediate relief, Justice Banerjee said.

Judiciary was short of manpower and resources necessary to deal with problems, he said. “The judge population ratio needs to be maintained to tackle the number of cases pending in the courts. There needs to be 1.80 lakh judges to fulfil that requirement, but we have 18,000 to 19,000 in the district judiciary; 1065 sanctioned in the High Courts of which only 715 are filled up and only 34 judges in the Supreme Court.”

“It is only the police, who face a similar shortage of force and that needs to be remembered when we blame the investigation for being shabby, “ the Chief Justice said. Police reforms were a far cry, even two years after the Supreme Court delivered the Prakash Singh judgment, calling for police reforms and separation of investigative wing of the police from law and order.

According to Justice Banerjee, transfers both in the bureaucracy and in the police hinged on the transient political executive, and “unless there is some permanence, there can be no meaningful reforms or assured governance.”