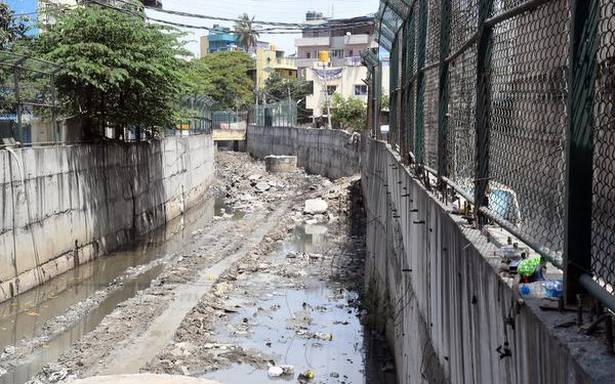 The city’s historically significant rajakaluve, K-100, is in the process of getting a facelift as part of a ₹160-crore ‘Citizens Water Way Project’. However, addressing the inflow of sewage and untreated industrial effluents, indiscriminate dumping of waste and encroachments along the major stormwater drain (SWD) is proving to be a challenge to the Bruhat Bengaluru Mahanagara Palike (BBMP).

BBMP Chief Commissioner Gaurav Gupta told The Hindu said that, as per the project plan, the first step is to address inflow of sewage, untreated effluents, garbage and encroachments. Nine kilometres of the major drain measuring 11.4 km in length has been divided into different work sites, each measuring 1 km.

Earth work and desilting components have been completed in four of these work sites, and up to 70% in two sites. While sewage inflow has been arrested in six sites, it is yet to be addressed in the three other sites.

Work on the sewage treatment plant of 5 million litres per day (MLD) capacity had begun.

The project was mentioned in Chief Minister B.S. Yediyurappa’s ambitious Bengaluru Mission 2022, which was announced in December 2020. The K-100 drain connected the erstwhile Dharmabudhi lake, where the Kempegowda Bus Station now stands, to Bellandur lake.

The project, with a deadline of 10 months, has been envisaged to establish the major drain as a waterway and ecological corridor, and was taken up on the lines of the ‘Sabarmati River Waterfront’ project in Gujarat.

“Progress of work is reviewed every week. Work on the mock-up of the stretch has been taken up and will be ready in July,” the Chief Commissioner said. Since walkways are part of the plan, work on precast elements has also been taken up. The BBMP is also strengthening the retaining wall in locations where it was missing.

“It is only when work is taken up on the ground that complex issues crop up. In some places, we found that the underground sewage lines were running inside the drain. Waste was being dumped by residents living in the vicinity, which was affecting the work,” he said.

Mr. Gupta added that civic officials have been directed to clear encroachments along the stretch, and also tackle legal hurdles to ensure that the work is completed on time.