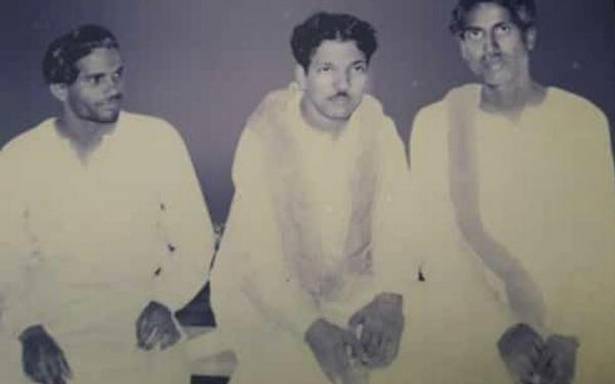 He died of age-related illness at a private hospital in Tiruch early morning.

Muthu, a member of DMK since its inception, was in the forefront in spearheading the ideals of the party in the erstwhile undivided Tiruchi district. A staunch loyalist of DMK founder C.N. Annadurai, Muthu had close links with him even before he founded the party and took part in many struggles called by him against the Congress regime in Madras Presidency.

At the invitation of Annadurai, Muthu resigned a job in Southern Railway and entered politics full time. He stayed in Salem, Kancheepuram and Chennai, then Madras, for about 20 years in the early years of the DMK to popularise the party ideals before being moved to his native in 1969.

When Annadurai fielded Karunanidhi in Kulithalai constituency in 1957, Muthu shouldered the responsibility of familiarising him in the villages.

Locals recall that Karunanidhi stayed in the house of Muthu and campaigned whenever he visited the Nangavaram area, a part of Kulithalai constituency.

“I have heard elders recall Karunanidhi never forgot his friendship with him. Whenever he visited Tiruchi or Karur he would invariably meet Muthu and share nostalgic memories,” said Koundampatti R. Subramani, (71, a farmer leader.

“The 23-day Nangavaram struggle, seeking ownership rights for those ploughing the lands of big landlords, was one among the struggles of the DMK that reached every nook and corner of the State in 1957. “Thalaivar [Karunanidhi] and my father led the famous struggle,” said Anbalagan, son of Muthu.